The Center for Astrophysics | Harvard & Smithsonian advances humanity’s knowledge of the Universe by uncovering the nature of distant cosmic phenomena. But many of our greatest discoveries start with the simple act of observing. Here’s what to look for in our current night sky. (Courtesy NASA/JPL-Caltech)

What's Up for November? A lunar eclipse, the moon and planets, and the Leonid meteors.

The Moon goes all red, plus Leonid meteors!

The Leonids will battle against moonlight this year, but anyone with a view of the Moon in the a.m. on Nov. 8 can enjoy a lunar eclipse.

A total lunar eclipse is on the way, to provide a little celestial magic, early on the morning of November 8th. The eclipse will be visible to viewers in North America, the Pacific region, Australia, and Eastern Asia – anywhere the Moon is above the horizon while the eclipse is happening.

For observers in the Eastern time zone of the U.S. and Canada, the partial eclipse begins a little after 4 a.m. It reaches full eclipse about 5:15 local time, and the Moon then sets while still in eclipse for you. For observers on the West Coast of North America, that translates to the partial eclipse beginning just after 1 a.m., and reaching full eclipse by about 2:15 a.m. You'll be able to see the entire eclipse unfold before sunrise, weather permitting, as the Moon exits the dark part of Earth's shadow (called the umbra) a few minutes before 5 a.m. 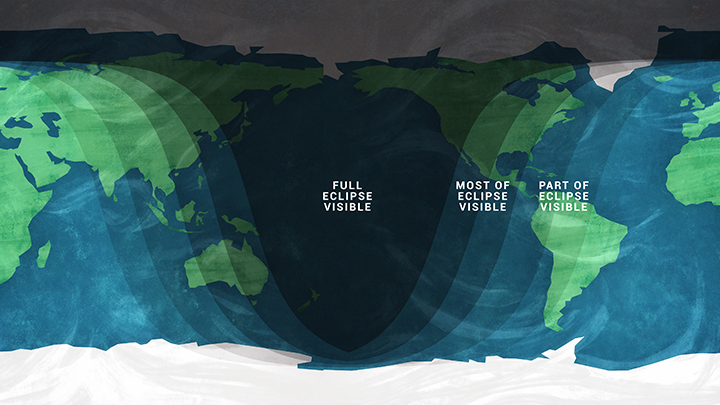 Map showing where the lunar eclipse will be visible on November 8.

And during this eclipse, viewers with binoculars can spy an extra treat – the ice giant planet Uranus will be visible just a finger's width away from the eclipsed Moon.

Check your local details to find out if the eclipse is visible from your area, and find lots more eclipse info from NASA at the address on your screen.

In the pre-dawn hours of November 11th, you'll find the Moon directly between Mars and bright bluish-white star Elnath. Elnath is the second brightest star in the constellation Taurus, after reddish Aldebaran, and it forms the northern horn of the bull. You'll find that Elnath is about the same brightness as the star Bellatrix in nearby Orion, where it forms one of the hunter's shoulders. 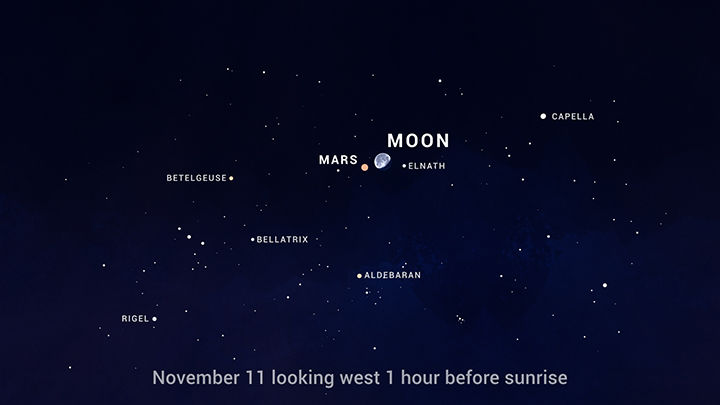 Sky chart showing the Moon's location on the morning of Nov. 8, between Mars and bright star Elnath.

On November 20th, in the hour before sunrise, look toward the southeast to find a slim, crescent Moon hanging right above bright bluish star Spica. It's a giant star, 10 times the mass of our Sun, and 12,000 times more luminous. Fortunately for us, it's located 260 light years away.

And in the evening sky, on November 28th, a beautiful crescent Moon hangs beneath Saturn in the south after sunset. 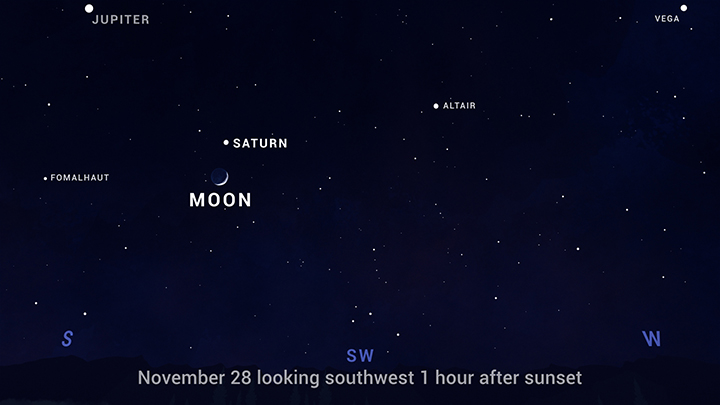 Sky chart showing the Moon beneath Saturn in the evening sky on November 28.

The Leonid meteor shower is active throughout November. It peaks after midnight on the 18th, with something like 15 to 20 meteors per hour under clear, dark skies.

On the peak night for the Leonids this year, the Moon will be about 35% full, meaning it will interfere with your ability to see the fainter meteors. 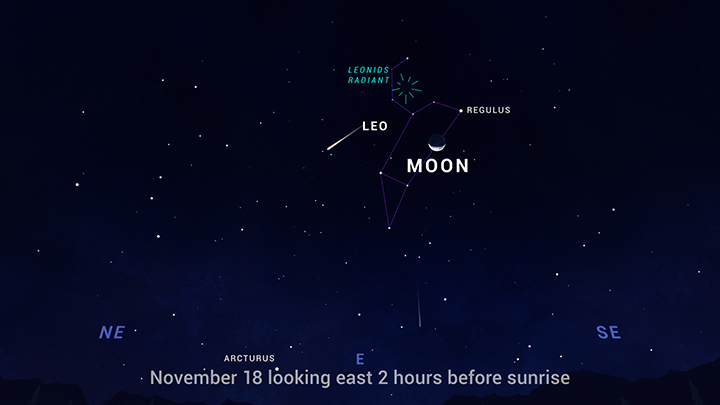 Sky chart showing the radiant, or apparent point of origin, of the Leonid meteors in the east before dawn on November 18.

The shower's name comes from the constellation Leo, the lion, from which its meteors appear to radiate. The meteors are dusty bits of debris left behind by comet Tempel-Tuttle as it orbits the Sun. This comet was actually discovered twice, independently.

On the peak night for the Leonids this year, the Moon will be about 35% full, meaning it will interfere with your ability to see the fainter meteors. However, Leonid meteors are often bright, with trails (also called trains) that persist for a couple of seconds after they streak across the sky.

And while the Moon will be rising in the east with Leo around midnight local time, it's actually better to view the sky away from the meteors' apparent point of origin, by lying back and looking straight upward, as any meteor trails you see will appear longer and more spectacular.

Here are the phases of the Moon for November: 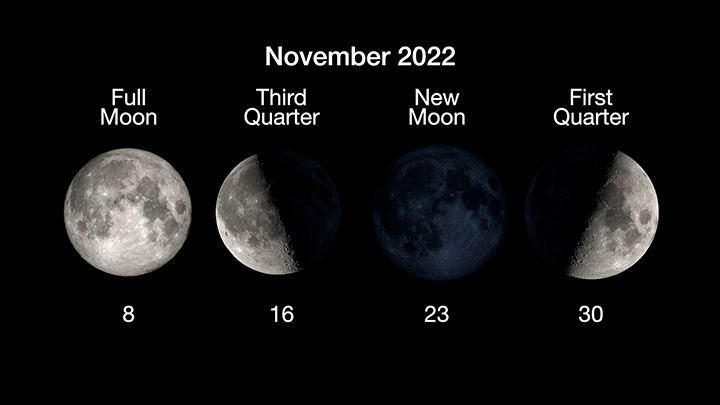