A Bright Flare from the Star Proxima Centauri 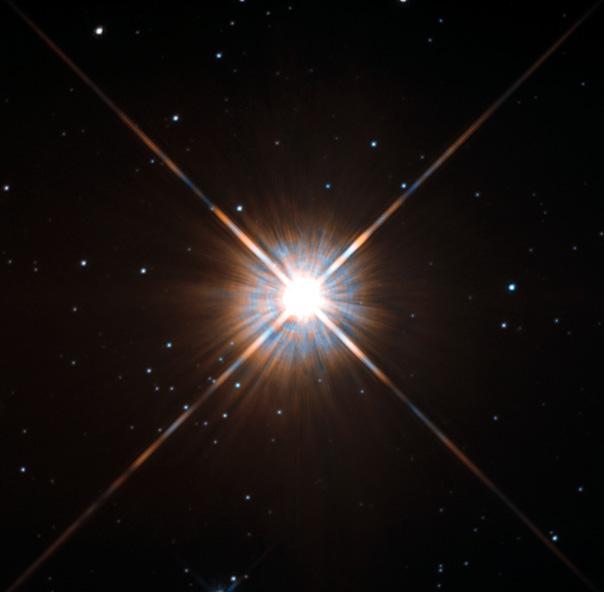 A Hubble image of the M-dwarf star Proxima Centauri, our closest stellar neighbor about four light-years away. Proxima hosts two planets, and is known to actively flare. Astronomers studying the suitability for life evolving on exoplanets around M-dwarf stars have completed a multi-wavelength analysis of an extreme flare on Proxima Cen.

The prospects for life around low-mass, cool M-type stars have been extensively discussed because these stars are the most common ones in the galaxy, and they frequently host Earth-sized planets in their habitable zones (orbits where the surface temperatures can support liquid water). Unfortunately for the prospects of life, however, these stars also exhibit higher levels of stellar activity and flaring than do more massive, solar-type stars, and flares can gradually deplete a planet’s atmosphere of molecules needed for life. Moreover, these hostile conditions persist in some fashion throughout their lifetimes. The star Proxima Centauri, an M-dwarf, is only 4.3 light-years away and hosts the closest exoplanetary system to us. It contains a potentially Earth-mass planet with a ∼230 kelvin temperature and a second, more massive planet in a more distant, colder orbit making the star a prime source for studying habitability around M-dwarf stars. Proxima Cen has also long been known to flare.

About four years ago the ALMA submillimeter facility discovered that flaring around M-dwarf stars produced detectable signals at submillimeter wavelengths. CfA astronomers David Wilner and Jan Forbrich were members of a team that carried out a multi-wavelength campaign to study flaring on Proxima Cen. They used the PAthfinder Australian Square Kilometre Array in the radio, ALMA, TESS (the Transiting Exoplanet Survey Satellite) in the optical, the du Pont telescope at Las Campanas in the optical, and the Hubble Space Telescope in the ultraviolet. (Several other telescopes were included in their program but not for these reported observations.)

On May 1 of 2019 these telescopes simultaneously saw the brightest flare ever detected from Proxima Cen, more than one thousand times brighter than any other seen, and at some wavelengths more than ten thousand times brighter. The multiwavelength coverage of the event, which lasted for several minutes, reveals details of the energetics and enabled the scientists to infer that the flare was the result of magnetic loop effects of the stellar surface accelerating hot, charged particles; the team notes strong parallels to mechanisms at work in solar flares. This new result does not enable any firm conclusions about the potential for life on Proxima Cen, but it does add dramatic new evidence of the potential hazards around M-dwarf stars. The authors conclude by noting that future all-sky submillimeter surveys could provide many constraints on exoplanet host stars and their suitability for life.