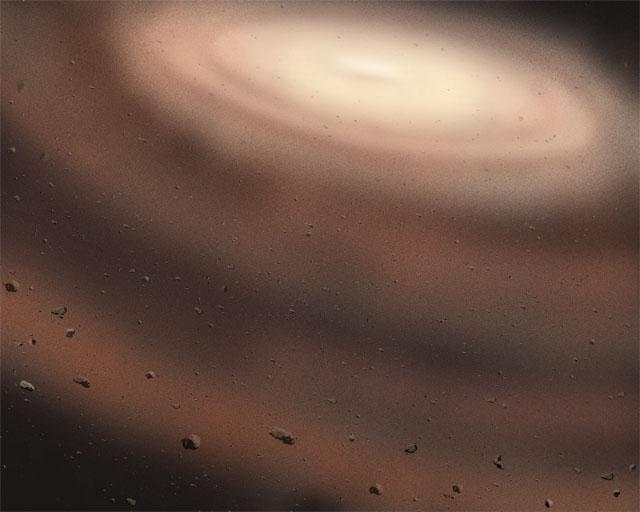 An artist's conception of the early solar nebulae, illustrating material in the disk as it cools and coalesces, ultimately evolving into rocky planets. The composition of the rocky planets and meteorites in the Solar system differs from that of the Sun, a puzzle since both emerge from the same molecular cloud material. Astronomers have simulated the complex temperature evolution of the young planetary disk and conclude that the Solar nebula appears to have developed under rare conditions, either forming from a parent molecular core with unusally high temperatures or with some other energy source heating the young disk.
USRA/LPI

Planets and their stars form from the same reservoir of nebular material and their chemical compositions should therefore be correlated but the observed compositions of planets do not match completely those of their central stars. In our Solar system, for example, all the rocky planets and planetesimals contain near-solar proportions of refractory elements (elements like aluminum that condense from a gas when the temperature falls below about 1500 kelvin) but are depleted in volatile elements (those that evaporate easily, like nitrogen). Astronomers think that this was the result of planets forming by the coalescence of already-condensed mineral dust.

As the initial, cold molecular cloud core collapses and a disc forms, heating from the new star (plus the viscosity of the disc) can vaporize some of the primordial condensed material – forcing the condensation sequence to begin anew but now under higher temperature and pressure conditions that evolve relatively rapidly. Astronomers also analyze meteorites of various types to determine their chemical compositions. Depending upon the properties of the initial molefular cloud core and the disc, the temperatures produced during planet formation may not have been sufficient to vaporize the most refractory of the pre-existing material. Since different minerals in planetesimals condense under different conditions, times, and places, the overall situation is complex, making it hard to understand the observed chemistry of planets.

CfA geologist Michail Petaev and his colleagues simulated the collapse of a molecular cloud core and the formation of the star, disk and planets, and analyzed the evolving distribution of temperatures across the disk to infer the mineral condensation sequence. They find that the properties of the initial cloud core significantly affect the maximum temperatures reached in the disk and the resultant compositions of the planets and asteroids; the maximum temperature occurs around the end of the collapse phase, after a few hundreds of thousands of years. They also find that while the composition of the star is similar to that of the molecular cloud core, the star might be slightly depleted in some of the most refractory elements – and thus the stellar composition may not be a good approximation to the initial composition of the core. Only cloud cores with high initial temperatures (or low disk rotation) will produce refractory-rich planets. Significantly, they conclude that in order to reproduce the composition seen in Solar system meteorites and the terrestrial planets either the initial core had rare properties like temperatures near 2000 kelvin (well above the expected median value of 1250 kelvin), or else some other source of heating must have raised the protoplanetary disk's temperature.