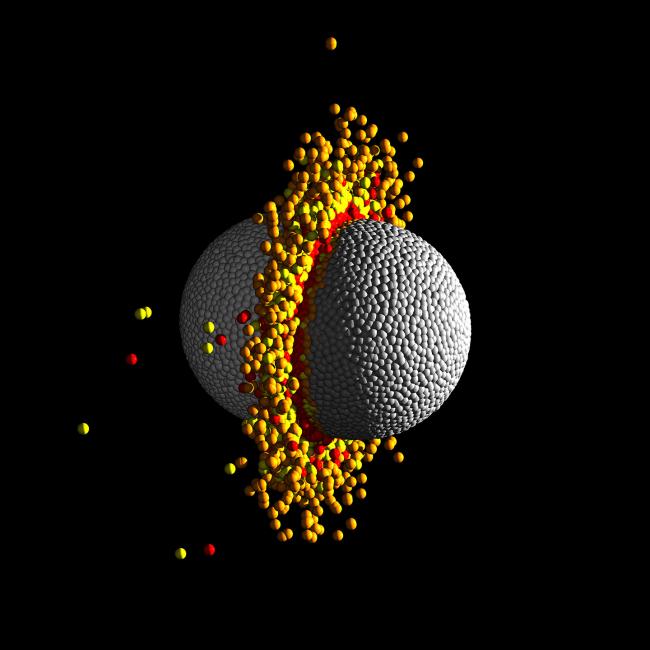 There are currently about 2000 confirmed exoplanets with radii less than about three Earth-radii, and measurements of their densities reveal an astonishing diversity. Some have densities lower than Neptune which is made mostly of volatiles (materials less dense than metal and rock, but Neptune has almost four times the Earth's radius), while others appear to have rock-like densities, as high as the Earth's or higher. Such a wide range of compositions may be the product of the different initial conditions in the planet-formation process, or it could be because something dramatic happens to the planet to alter its initial properties as it evolves.

In a new paper in Nature Astronomy, Istituto Nazionale Di Astrofisica (INAF) astronomers Aldo S. Bonomo and Mario Damasso and Center for Astrophysics | Harvard & Smithsonian (CfA) astrophysicist Li Zeng, along with a large team of colleagues, report that a giant collision must have occurred in the exoplanetary system Kepler-107. While there is some observational evidence for the collisional process in our own solar system, so far there has been no unambiguous finding in support of the impact scenario among exoplanets.

Astronomers used to think that low-density planets, like the giants Jupiter, Saturn, Uranus and Neptune, form from cold ices and gas in the outer regions of a young star's protoplanetary disk; the inner zone builds planets from rocky elements like silicates and iron whose particulates can survive in the hotter environment. Today the picture has become more complicated with hundreds of low-density giant exoplanets discovered orbiting close to their stars. In the case of evolutionary effects, two processes are thought most likely to affect a planet's density: mass loss from the planet's atmosphere and/or surface due to evaporation by the host star's radiation, or a giant collision between planets.

Of the four known planets in Kepler-107, the two innermost ones have nearly identical radii of 1.536 and 1.597 Earth-radii, respectively, (the uncertainty of each is only about 0.2%). Their periods are also similar at 3.18 and 4.90 days, meaning that they orbit relatively nearby each other. Using the HARPS-N spectrograph at the Telescopio Nazionale Galileo in La Palma, the team determined the planet masses, and hence their densities. The observations are surprising -- their densities are very different: 5.3 and 12.65 grams per cubic centimeter, respectively. For comparison, water's density is 1 grams per cubic centimeter and the Earth's is 5.5 grams per cubic centimeter. The fact that one of the planets has a density more than twice the other cannot be easily explained by stellar radiation effects which should have affected them both in the same way. Moreover, it is the outer one that is denser than the inner one. The astronomers argue instead that a giant impact on one planet, Kepler-107c (the denser planet), stripped off part of its initial silicate mantle, leaving it dominated by its dense iron core. They support this hypothesis with theoretical calculations.

The CfA's Li Zeng notes: "This is one out of many interesting exoplanet systems that the Kepler space telescope has discovered and characterized. This discovery has confirmed earlier theoretical work suggesting that giant impact between planets has played a role during planet formation. The TESS mission is expected to find more of such examples."

If catastrophic disruptions occur frequently in planetary systems, then astronomers predict finding many other examples like Kepler-107 as an increasing number of exoplanet densities are determined precisely.