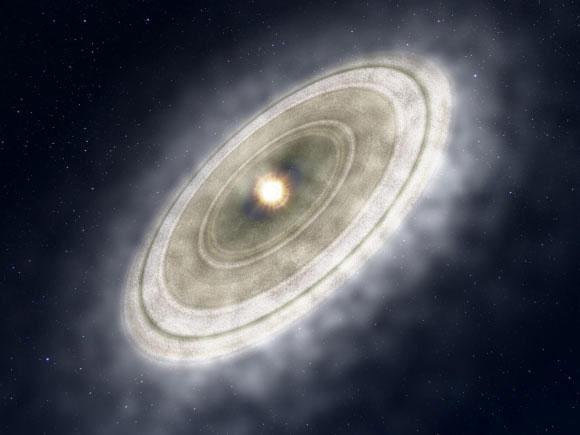 An artist's impression of a star's dusty debris disk, thought to be produced when asteroids or other planetesimals collide and fragment. Astronomers studying the debris disk around the star HD 206893 have imaged a wide gap in the disk extending from about 50 to 185 au from the star. After modeling the system, they conclude it contains a 1.4 Jupiter-mass planet orbiting about 79 au from the central star.

Debris disks around main-sequence stars are tenuous belts of dust thought to be produced when asteroids or other planetesimals collide and fragment. They are common: more than about a quarter of all main-sequence stars have debris disks and, since these disks can be hard to detect, it is likely that the fraction is even higher. Current instruments are only able to detect debris disks in systems that are at least an order of magnitude more luminous than the disk generated by the solar system’s Kuiper Belt (the region extending from the orbit of Neptune at about thirty astronomical units out to about fifty au).

The dust in debris disks is worthy of study in its own right but also offers an opportunity to trace the properties of planetary systems. The largest dust grains (those as big as a millimeter), whose collective thermal emission is measured with telescopes like ALMA (Atacama Large Millimeter/submillimeter Array), are relatively unaffected by stellar winds or radiation pressure. Rather, their distribution reveals the effects of gravity and collisions. The "chaotic zone" is the extended region around a planet within which dust has no stable gravitational orbits, resulting in a gap whose width depends among other things on the planet’s mass. A planet in a debris disk can create such a gap, and measurements of the gap’s dimensions can thus be used to deduce the mass of the planet – a key exoplanet parameter that is otherwise difficult to obtain.

CfA astronomers Sean Andrews and David Wilner were members of a team that used ALMA to study the known debris disk around the star HD 206893 about 135 light-years away from us. The star also has a brown dwarf binary companion orbiting at about 10au and whose mass is about 15-30 Jupiter-masses. The ALMA images spatially resolve the disk - it extends from about 50 -185 au - and the astronomers find evidence for a gap stretching from about 63 – 94 au. If the gap was carved by a single planet in a circular orbit, chaotic zone theory implies the planet should have a mass of about 1.4 Jupiter-masses and orbit at about 79 au. Future, higher resolution ALMA observations have the potential to help constrain the dynamical behavior of the brown dwarf as well as to improve the characterization of the inferred new planet.