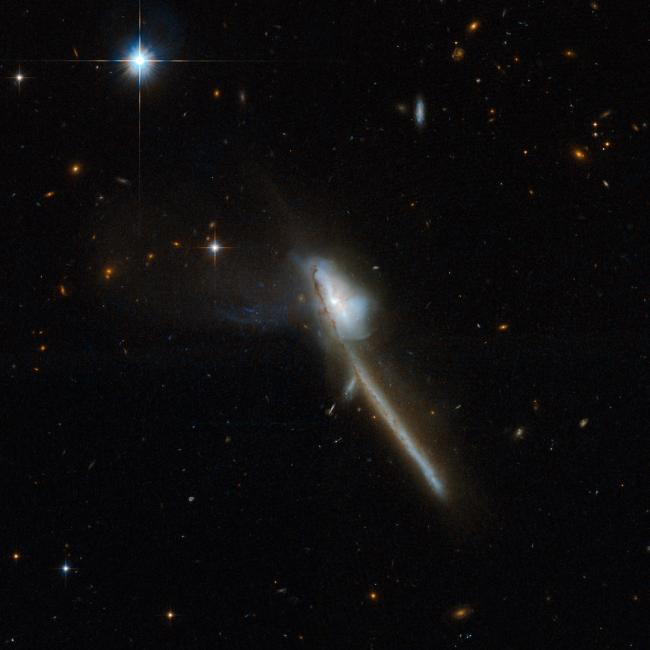 A Hubble image of the infrared luminous merging galaxy system Mrk 237, whose infrared emission is powered by both star formation and an AGN. Astronomers have usually estimated a galaxy's star formation rate from its far infrared luminosity by assuming it is primarily produced by dust heated by young stars, without accounting for possible AGN-heated dust. Astronomers have used simulations of galaxy mergers to conclude that in some mergers most of the cool dust may in fact be heated by the AGN rather than by star formation.

Over thirty years ago the Infrared Astronomy Satellite discovered that the universe contained many almost invisible yet enormously luminous galaxies - some of them more than a thousand times brighter than our own Milky Way. These galaxies shine primarily in the infrared, powered by dramatic bursts of star formation that are buried deep within clouds of dust and molecular gas. The dust absorbs the ultraviolet light emitted by the hot young stars, obscures the optical light, and re-radiates the energy at far infrared wavelengths. These wavelengths are about one hundred times longer than optical wavelengths and characterized by cool temperatures, roughly 40 degrees kelvin. Astronomers argue that, at least in some cases, the hyperactivity is triggered by collisions between galaxies that induce the collapse of their clouds of gas into new stars.

Collisions between galaxies are common. Indeed, most galaxies have probably been involved in one or more encounters during their lifetimes, making these interactions an important phase in galaxy evolution and the formation of stars in the universe. (The Milky Way, for example, is bound by gravity to the Andromeda galaxy. We are approaching each other at a speed of about 50 kilometers per second, and are expected to meet in another billion years or so.) Collisions are thought to have been even more commonplace about ten billion years ago, the epoch sometimes called Cosmic Noon because during this period the universe went through a massive phase of star production -- more than ten times today's rate as inferred using only the powerful infrared emission from these galaxies.

But there are other ways to heat the dust besides ultraviolet from star formation, and a careful accounting of heating mechanisms is required to be certain of the star formation rates, especially for galaxies at Cosmic Noon which are so far away that most alternative star formation diagnostics are impractical. One possible alternative source of energy is the supermassive black hole at the galaxy’s center. When gas and dust actively accrete onto the environment of a supermassive black hole, powerful jets of charged particles can be ejected and the dusty torus around it can heat up. These objects are called active galactic nuclei (AGN). Astronomers have long appreciated that the hot, X-ray emitting region around an AGN has dust that emits in the infrared but have argued that the infrared would be characterized by such high temperatures, and arises from such small regions, that its contribution to the total far infrared emission should be negligible.

CfA astronomers Juan Rafael Martínez-Galarza and Howard Smith and their colleagues have now shown that a bright AGN can, under some circumstances, dominate the far infrared dust emission. Using simulations of merging galaxies, the astronomers show that radiation from a bright AGN can penetrate into the galaxy and warm the dust even though it originates in hot material only a few hundreds of light-years in size, and that material emits in the far infrared. By artificially turning the simulated activity of the AGN on and off to quantify the effects, the scientists demonstrate that mergers of massive galaxies can result in AGN-heated dust dominating the cool, far infrared emission in the galaxy by as much as a factor of four. Star formation rates estimated from the far infrared luminosity in these objects will be wrong without including corrections for this large factor. The team goes on to propose spectroscopic and imaging methods to identify these cases using ionized atomic line signatures and spatial morphologies.