Head in the Stars, Hands in the Dirt

With help from neighbors, Center for Astrophysics gardeners create a bountiful retreat open to all. 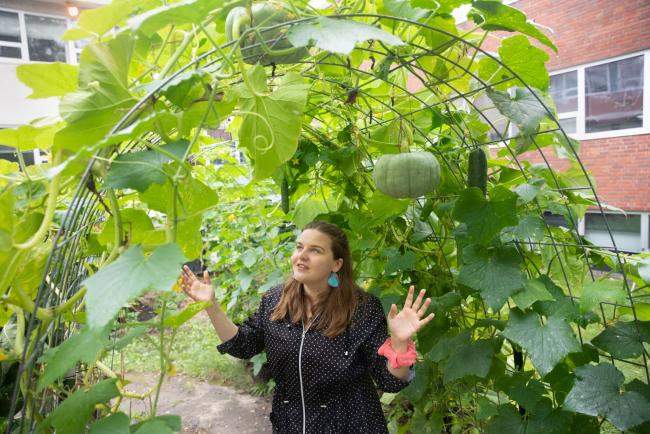 Graduate student Magdalena Siwek gives a tour of the garden at the Center for Astrophysics.

It's like a small oasis in the middle of the cosmos — or at least for those who look to it.

The Center for Astrophysics | Harvard & Smithsonian provides an earthly haven for astronomers where they can walk, take their lunch, and even find it. There are fresh tomatoes, cucumbers, zucchini, lettuce, cabbage, onions, rhubarb, strawberries, peppers, chilies, herbs, and even pumpkins hanging in hammocks (to give them support as they grow) from the arched garden arbor. There’s even a plan to start growing pawpaws, a fruit with a mango-like tropical taste that was George Washington’s favorite.

Sunflowers in the fenced in garden (to guard from turkeys) stand over six feet tall and if you look closely, you’ll find some eastern prickly pear cactuses, an endangered cactus that is native to New England. The group has also been growing native plants sourced from local nurseries and wildflowers to attract pollinators. The bee balm they grow helps with that, too.

The garden was started a year ago by Magdalena Siwek, a Ph.D. candidate in the astronomy department. People from the CfA, especially other graduate students, joined in over the year and the group now hosts daily lunches open to all, and gardening events. Members of the surrounding Cambridge community have even started helping to tend the garden. One community member helped water it while Siwek and others folks were on vacation and another donated her collection of bean seeds that are being planted now.

With all this, what's Siwek's favorite thing about the garden? In short, everything.

"I love the cucumbers, I love the arched path," Siwek said. "You walk through and you see a pumpkin above or a cucumber growing by your elbow. I love seeing how pollinators have returned to the area. This area was barren before… it’s been great to see the area transform."

This story was written by Juan Siliezar and originally appeared in the Harvard Gazette.