Charles Alcock has prioritized large-scale, private philanthropic support for the Smithsonian Astrophysical Observatory at the Center for Astrophysics. 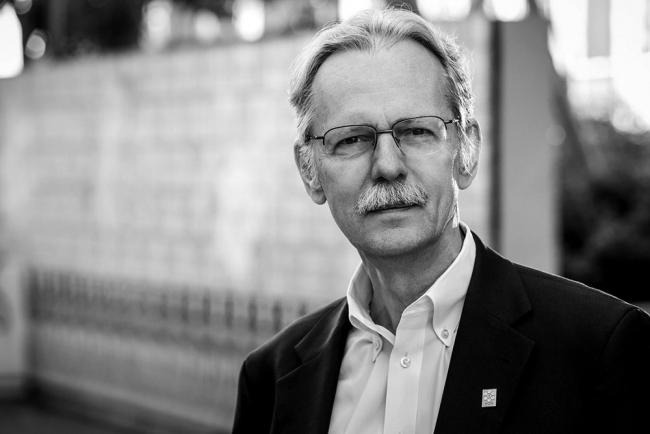 It was a milestone moment. In 2019, the Smithsonian Astrophysical Observatory (SAO) received the largest private philanthropic gift in its history: $10 million.

The gift funds SAO scientists and their work on G-CLEF (the GMT-Consortium Large Earth Finder), an astronomical instrument that will help search for the presence of life in the universe by detecting key molecules in planetary atmospheres.

But the eight-figure gift did more than support research — it signified a shift in financial strategy for the SAO. Center for Astrophysics (CfA)* Director Charles Alcock was responsible in large part for this change in strategy for SAO after prioritizing private fundraising mid-tenure.

"The CfA has ambitious research goals, some of which require substantial financial investment. I strongly believe that we can make our scientific vision a reality by sharing our story and engaging with external constituents," Alcock explains. "By partnering with donors and creating alliances with those who share our vision, we can accomplish even more than we ever dreamed."

To set the stage for philanthropy, Alcock established the Office of Advancement and External Affairs in 2013 to oversee donor engagement and support.

The plan has worked.

Alcock and the advancement team have engaged nearly 200 SAO donors since 2013, raising a total of $52 million for cutting-edge research. The funds support a variety of astronomical projects, including the Giant Magellan Telescope, the next-generation Event Horizon Telescope (ng-EHT) and MethaneSAT. Donors have also contributed to fellowships to support the next-generation of astronomers and scientists.

While securing gifts may seem easy, Alcock admits it hasn't been.

"Fundraising has been one of the hardest things I've done in my career," says Alcock, who is an astronomer by training. “For years, I focused on basic scientific research on the cosmos. Now, I’ve had to switch gears and get out of my comfort zone.”

"SAO has an audacious goal, a small advancement team and a modest programmatic budget," says Sharon Allen, chief advancement and external affairs officer at SAO. "To accomplish what we have over these past eight years is truly remarkable. I'm extraordinarily proud of our work. Charles has been a tireless champion for the CfA over the years. Donors instantly recognize his passion for research and the cosmos. It’s because of him that so many have supported our work."

Allen, who serves as the primary liaison between Alcock and donors, says that at its core, fundraising is about building relationships. "Charles is genuine, astute and endearing, making him well-suited for this role," she says.

Through the years, she and Alcock have met with numerous friends to amplify the cause: Searching for life in the universe. This is widely appealing, Allen says, and her travels with the director have led to insightful conversations with a variety of notable individuals, including Mickey Hart from the Grateful Dead; American politician Lamar Smith; former Supreme Court Justice Sandra Day O'Connor; and popular Spanish television host Don Francisco.

Their efforts have taken them to the summit of Mauna Kea in Hawaii, where SAO operates the Submillimeter Array Telescope. Then on to the remote Atacama desert in Chile — the construction site of the GMT — where they had a unique opportunity to witness a total solar eclipse by day and stargazing by night, where the Milky Way shimmers brightly in the night sky.

They have also visited the Kennedy Space Center for the launch of the Solar Probe Cup — an instrument designed and built at the CfA — and received special tours of SpaceX launch and landing pads and facilities, as well as the infamous Launch Pad 39A.

Alcock will step down as director of the CfA on January 1, 2022, but his legacy will live on.

"This has truly been the adventure of a lifetime," Allen says. "We've traveled to remote corners of the earth to experience total darkness with prospective supporters, where we've bonded over the shared experiences under the cosmos. We have had ambitious goals, and Charles has provided inspiring leadership at every turn."

Robert J. Spiller, assistant secretary for advancement at the Smithsonian, says Alcock has created a strong foundation for philanthropy.

"He has had remarkable success as a fundraiser," Spiller says. "In my view, the reason is Charles’ ability to build authentic and trusted relationships, personal integrity and true passion for the work at SAO."

Spiller remembers the first day he met Alcock three-and-a-half years ago on his first day working at the Smithsonian. Allen and Alcock dropped by his office to present and close that 2019 $10 million gift.

It was a proud moment for the Smithsonian and an unforgettable first day on the job, Spiller says. "As they left my office, I asked, 'Same time tomorrow for the next one?'"

*Note: The Center for Astrophysics is not a legal entity; rather, it exists in name only, and is comprised of the Smithsonian Astrophysical Observatory (SAO) and Harvard College Observatory (HCO). Donors choose to give to either SAO or HCO, separate 501(c)(3) institutions, and gifts are managed separately. This story features the efforts of SAO.