A Massive Protocluster of Galaxies in the Early Universe 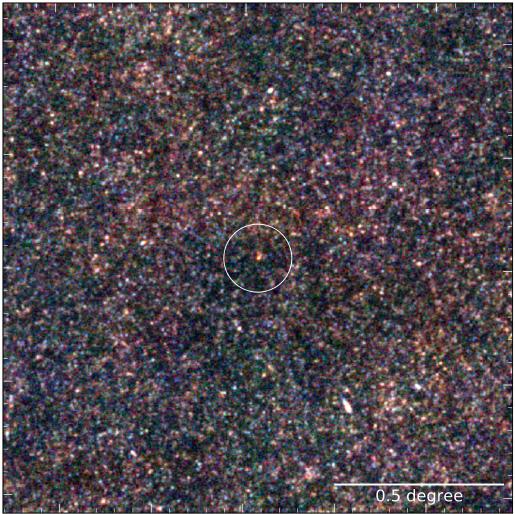 A false-color image of the far-infrared emission from a massive protocluster of galaxies (in the circle) dating from the epoch about 1.4 billion years after the big bang.

Astronomers have detected massive clusters of galaxies dating from as early as only about three billion years after the big bang. The stars in these clusters presumably had to form at an even earlier period and those progenitor systems, dubbed 'protoclusters,' are now the subject of intense searches. They have been identified in simulations of cosmological evolution, so they are expected to be present. Active star formation underway in them should be bright enough to allow their detection, but so far the evidence for any has been slight.

In the new issue of Nature, CfA astronomers Matt Ashby, Chris Hayward, and Tony Stark join with thirty-five of their colleagues to report discovering a massive protocluster dating back to an epoch less than two billion years after the big bang. The team has been using the South Pole Telescope to identify distant galaxy clusters at millimeter wavelengths. In that survey, which covers almost 6% of the sky, the brightest object discovered was one called SPT2349-56. The astronomers performed follow-up studies on this object using several other facilities including the ALMA array of telescopes and the APEX telescope. The source turned out to be a clump with multiple sources (in fact the team found evidence for fourteen components in the cluster), and spectral information showed the objects to be located in the epoch about 1.4 billion years after the big bang.

The scientists compared their data with results of simulations of galaxy clusters in the early universe. They conclude that most likely SPT2349-56 is a cluster with a mass about one thousand times larger than the Milky Way’s mass, and that each of its major component galaxies is forming stars at a rate of between fifty to one thousand times faster than our galaxy. Moreover, the cluster seems to be compact in scale, stretching across only about five hundred thousand light-years. The modest dimensions, large mass, and relatively modest velocities seen in the object suggest that many of the components are likely to coalesce as the system evolves. The paper concludes that this system represents the detection of a galaxy cluster core that is already at an advanced stage of formation when the Universe was only 1.4 billion years old.