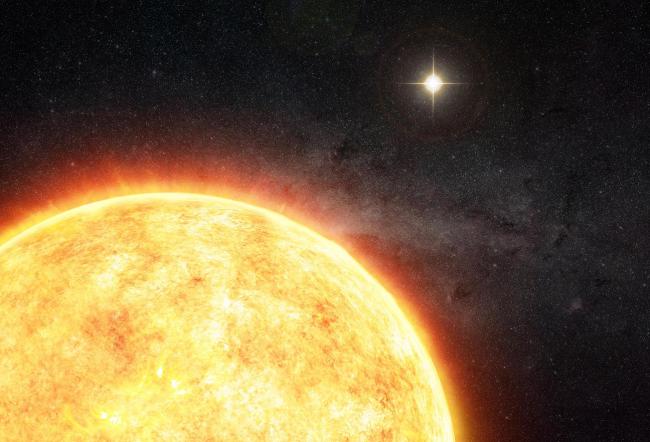 A new theory published today in The Astrophysical Journal Letters by scientists from Harvard University suggests that the Sun may once have had a binary companion of similar mass. If confirmed, the presence of an early stellar companion increases the likelihood that the Oort cloud was formed as observed and that Planet Nine was captured rather than formed within the solar system.

Dr. Avi Loeb, Frank B. Baird Jr. Professor of Science at Harvard, and Amir Siraj, a Harvard undergraduate student, have postulated that the existence of a long-lost stellar binary companion in the Sun's birth cluster—the collection of stars that formed together with the Sun from the same dense cloud of molecular gas—could explain the formation of the Oort cloud as we observe it today.

Popular theory associates the formation of the Oort cloud with debris left over from the formation of the solar system and its neighbors, where objects were scattered by the planets to great distances and some were exchanged amongst stars. But a binary model could be the missing piece in the puzzle, and according to Siraj, shouldn’t come as a surprise to scientists. "Previous models have had difficulty producing the expected ratio between scattered disk objects and outer Oort cloud objects. The binary capture model offers significant improvement and refinement, which is seemingly obvious in retrospect: most Sun-like stars are born with binary companions."

If the Oort cloud was indeed captured with the help of an early stellar companion, the implications for our understanding of the solar system’s formation would be significant. "Binary systems are far more efficient at capturing objects than are single stars," said Loeb. "If the Oort cloud formed as observed, it would imply that the Sun did in fact have a companion of similar mass that was lost before the Sun left its birth cluster."

More than just redefining the formation of our solar system, evidence of a captured Oort cloud could answer questions about the origins of life on Earth. "Objects in the outer Oort Cloud may have played important roles in Earth's history, such as possibly delivering water to Earth and causing the extinction of the dinosaurs," said Siraj. "Understanding their origins is important."

The model also has implications for the hypothesized Planet Nine, which Loeb and Siraj believe isn’t alone out there. "The puzzle is not only regarding the Oort clouds, but also extreme trans-Neptunian objects, like the potential Planet Nine," said Loeb. "It is unclear where they came from, and our new model predicts that there should be more objects with a similar orbital orientation to Planet Nine."

Both the Oort cloud and the proposed location of Planet Nine are so distant from the Sun that direct observation and assessment are challenging for today's researchers. But the Vera C. Rubin Observatory, which sees first light in early 2021, will confirm or deny the existence of Planet Nine and its origins. Siraj is optimistic, "If the VRO verifies the existence of Planet Nine, and a captured origin, and also finds a population of similarly captured dwarf planets, then the binary model will be favored over the lone stellar history that has been long-assumed."

If the Sun did have an early companion that contributed to the formation of the outer solar system, its current absence begs the question: where did it go? "Passing stars in the birth cluster would have removed the companion from the Sun through their gravitational influence," said Loeb. "Before the loss of the binary, however, the solar system already would have captured its outer envelope of objects, namely the Oort cloud and the Planet Nine population." Siraj added, "The Sun's long-lost companion could now be anywhere in the Milky Way."