The WorldWide Telescope (WWT) is a free, open-source tool for exploring our knowledge of the universe. It provides planetarium-like views of the sky, as well as dynamic images of planets and other astronomical objects. The project enables users to incorporate images and video into scripts for custom “tours”, for use in classrooms, planetariums, museums, and other multimedia displays. WWT is a project of the American Astronomical Society (AAS), with scientific consultants from universities around the world, including the Center for Astrophysics | Harvard & Smithsonian. The WWT Ambassadors are scientists and science educators at CfA who use the WWT in public science outreach and education. WWT is both available as a web browser application and a desktop program for Windows computers.

Vivid Views of Space from Your Desktop

A large quantity of astronomical research is publicly funded, and freely available for use by anyone who wants it. However, much of that data requires extensive preparation before it can be used in publicly-accessible ways, such as museum or classroom programs. WWT takes high-quality images derived from observatories and space probes and incorporates them into an open-source platform for visualizing data and exploring the cosmos.

These programs include a web-based interface as well as a desktop client program for Windows, which simulate much of what you might see on a planetarium dome. WWT also includes scripting for using the images in custom programs. The project is designed to be useful to a broad range of users, including professional astronomers, public outreach professionals at museums and planetariums, classroom teachers, video producers, and the general public.

WWT began as a project within Microsoft Research, which was adopted by the AAS as part of its mission for public outreach. CfA astronomer Alyssa Goodman serves as one of the scientific consultants for the project, and leads the WWT Ambassadors program under the auspices of CfA’s Viz-e-Lab for producing scientific content for outreach.

The WorldWide Telescope Ambassadors program designs, develops, tests, and distributes K-12 and University science curricula and materials that use WorldWide Telescope and other astronomy-related visualization software. WWTA members conduct educational research that aims to develop effective ways to implement the WWT visualization tool in formal and informal learning settings across all age groups and geographical locations. 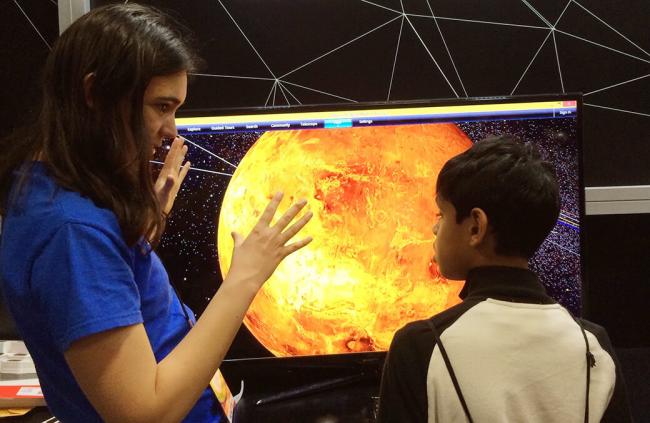