The Harvard College Observatory (HCO), founded in 1839, is part of the Center for Astrophysics | Harvard & Smithsonian. HCO is a research institution of the Faculty of Arts and Sciences, Harvard University, and provides facilities and substantial other support for teaching activities of the Department of Astronomy.

A Knowledge-Based Mission With A Harvard Pedigree

LEARN MORE ABOUT THE HARVARD DEPARTMENT OF ASTRONOMY

Although astronomy appears to have been taught from the earliest days at Harvard College, a professorship of mathematics and natural philosophy was first established in 1727 by virtue of a gift from Mr. Thomas Hollis. In 1738 John Winthrop, a friend of Benjamin Franklin and excellent scientist, was appointed to the position. In 1761 he went on an expedition in Newfoundland to successfully observe the transit of Venus, sent the results to the Royal Society, and was elected a member.

In 1839 William Cranch Bond, a prominent Boston clockmaker, was appointed as Harvard’s first “Astronomical Observer” which essentially established the Harvard College Observatory.  A visit from a brilliant comet a few years later helped stimulate the purchase of a 15-inch Great Refractor telescope from Munich, which remained the largest instrument in America for the next two decades.

Today at the Center for Astrophysics | Harvard & Smithsonian headquarters in Cambridge, this telescope is still on display, used only for an occasional student or special research project. It stands as an incredible example of 19th century scientific, engineering and architectural achievements.

LEARN MORE ABOUT THE GREAT REFRACTOR 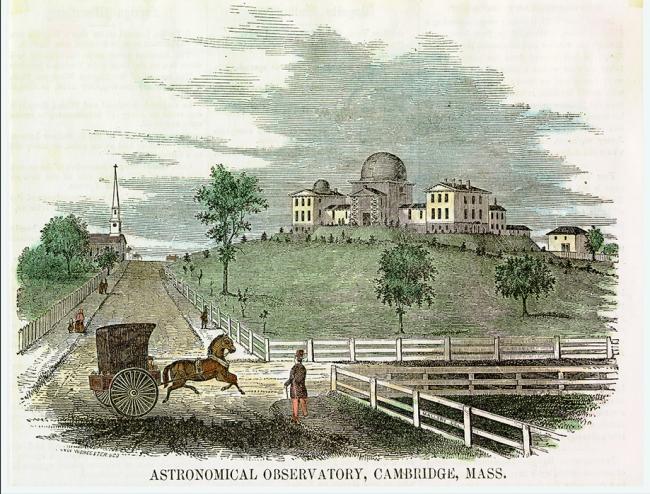 By the 1890s, E. C. Pickering had developed Harvard College Observatory into a major research institution. He established the renowned photographic program, covering both the northern and southern hemisphere with his spectrum surveys.

Photographs from that era show the top of Observatory Hill littered with numerous small temporary domes surrounding the mansion that served as office, lab, dormitory and dance hall. Many women, including Annie Jump Cannon and Henrietta Swan Leavitt, then known as “computers,” performed painstaking but pivotal classification research on these images.

The collection of some 500,000 astronomical plates exposed between 1886 and 1989 is now in process of being digitized in a project known as DASCH headed up by Professor Josh Grindlay.  This unique resource will significantly enhance the study of temporal variations in the Universe when it is complete. 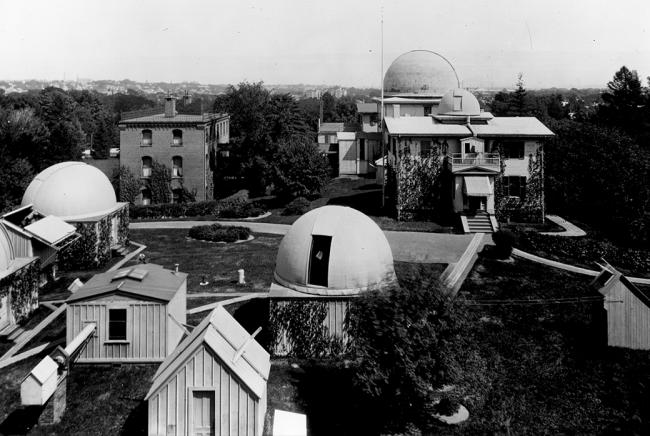 Harlow Shapley succeeded Pickering in 1921 as Director of the HCO and by 1928 had officially inaugurated graduate study of astronomy at the Observatory. Cecilia Payne-Gaposchkin was the first person to earn a PhD in Astronomy from Radcliffe College (1925). Astronomer Otto Struve called her work "undoubtedly the most brilliant PhD thesis ever written in astronomy." In her PhD research, Cecilia discovered that the atmosphere of the Sun is made mostly of hydrogen, in difference from the popular view that the Sun had the same composition as the Earth. Cecilia's discovery encountered opposition from many prominent astronomers of the day such as Henry Norris Russell, director of the Princeton University Observatory, who subsequently concluded that she was right.

Although the Department of Astronomy came into existence in 1931, the first chair, Donald Menzel, wasn't appointed until 1945. Menzel was subsequently named Director of the Harvard Observatory in 1952, and immediately set about to encourage the Smithsonian Astrophysical Observatory (SAO) to relocate to Cambridge, which it did in 1955. Fred Whipple was appointed as Professor of Astronomy in 1950 and was the department's second chair. In 1955, he assumed directorship of the SAO in its new location. In 1956 Cecilia Payne-Gaposchkin became the first woman to be promoted to full professor from within the Faculty of Arts and Sciences and soon after was appointed the third chair, making her the first woman to head a department at Harvard University.

George Field formalized the interactions between the two organizations by creating an administrative umbrella organization, the Center for Astrophysics | Harvard & Smithsonian. The Department of Astronomy, under a Chair, continues as an autonomous unit under the direction of the Harvard University Faculty of Arts of Sciences, but is housed at the CfA. The complement of approximately 60 PhD students, 25 undergraduate students and over 100 post-doctoral researchers enjoy access to the remarkable resources provided by both Harvard and Smithsonian faculties and facilities. 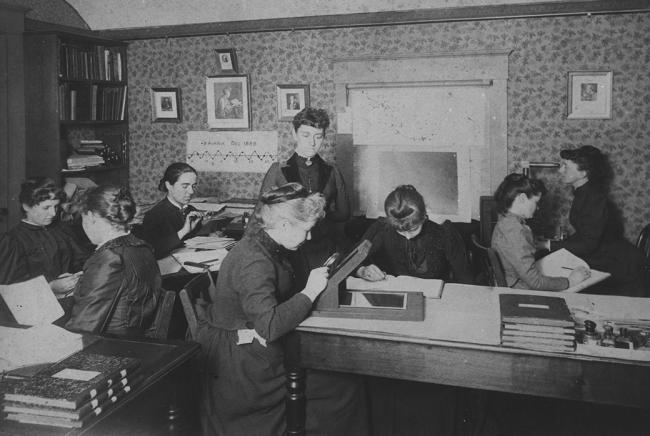 The computers of Harvard College Observatory