One of the best ways to observe newborn stars and their environment is to use light in the submillimeter range of wavelengths. The Submillimeter Receiver Lab at the Center for Astrophysics | Harvard & Smithsonian develops new and better receivers for submillimeter light, in support of next-generation telescopes, as well as supporting and upgrading receivers in existing observatories such as the Submillimeter Array (SMA). 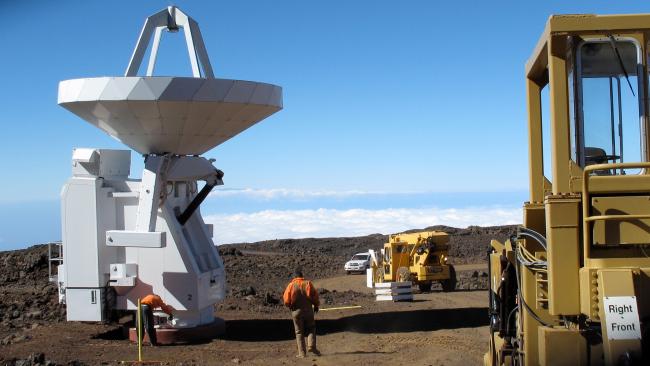 Building the Next Generation of Detectors

Submillimeter light lies on the boundary between infrared and radio light. This type of light is important to astronomers because it’s emitted by cold atoms and molecules such as those found in the interstellar clouds where stars are born. Submillimeter observatories like the SMA in Hawaii are dedicated to studying the birth of new stars, including those in distant galaxies. In addition, the Submillimeter Receiver Lab contributed to developing receivers used at the SMA and the Greenland Telescope as part of the Event Horizon Telescope (EHT) project. EHT is a globe-spanning array of observatories that captured the first image of a supermassive black hole.

Scientists and other researchers at the Submillimeter Receiver Lab look for ways to improve the receivers in these telescopes. In particular, they develop receivers using superconducting devices, which are extremely sensitive with low noise, and other devices necessary for receivers used in detecting a wider range of wavelengths of light.