Stars have a life cycle: they’re born, they pass through middle age, and they die. The birth of a star determines much of how it lives that life. For that reason, researchers study star-forming regions: the interstellar clouds of gas and dust that are both the raw materials and environment for star birth.

A Nursery for Stars

Orion is one of the most familiar constellations, thanks to the three bright stars of its “belt”, with an additional three points of light below that making up the “sword”. However, one of those isn’t a star: it’s the Orion Nebula, a dense cloud of gas and dust harboring one of the most active star-forming regions relatively close to Earth. More than 700 newborn stars have been identified inside the Orion Nebula, ranging in age from 100,000 years to slightly over a million years old — a tiny fraction of the Sun’s current 5 billion-year age.

While the nebula is visible even without a telescope, the newborn stars aren’t. That’s because gas and dust absorb much of the visible light produced by the stars. All star-forming regions are that way, so astronomers studying them rely on infrared, radio, and X-ray light to see through the dust. 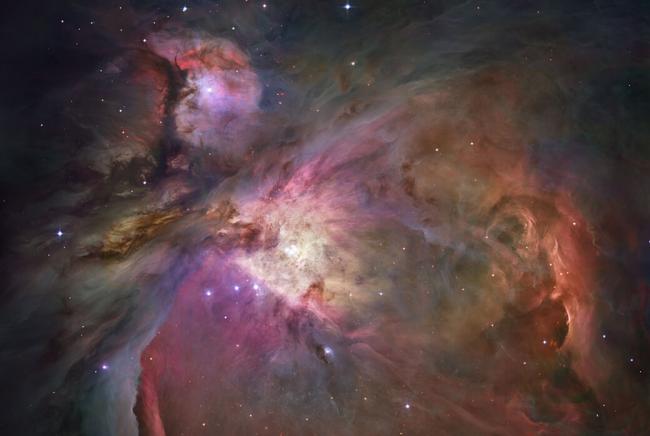 The Orion Nebula is one of the most famous star-forming regions, bright enough to be visible without a telescope. This image from NASA's Hubble Space Telescope shows how newborn stars sculpt the gas and dust around them.

Recipe for Stars and Planets

Star formation happens in interstellar molecular clouds: opaque clumps of very cold gas and dust. The process starts when some of those clumps reach a critical mass, allowing them to collapse under their own gravity. The cause could be as simple as random fluctuations of density within the cloud, or due to an outside influence: collisions with other clouds, a supernova, a shock wave from a black hole, or even a disturbance from other stars forming close by.

This disturbance compresses the gas and dust to the point where it has enough gravity to collect more material onto itself. That begins the process of forming protostars, the first stage of star formation. Depending on its size, a star-forming region can birth anywhere from a few to a few thousand protostars. Over time, these nascent stars will use up much of the gas and dust from the original molecular cloud, though they may also blast some of it away in the form of jets during the very energetic process of accretion.

Some of the raw materials in the cloud form objects smaller than stars: planets and brown dwarfs, which fall between giant planets and stars in size. Planets form from protoplanetary disks around newborn stars; astronomers have observed around 150 protoplanetary disks inside the Orion Nebula. Studying star-forming regions is also a way to understand how planets are born, and how the interstellar environment shapes them.

Extrapolating from observations, the Milky Way probably produces three or four new stars every year on average in its various star-forming regions. Starburst galaxies, by contrast, can produce hundreds. Astronomers compare star formation across galaxies to understand the differences.

Observations provide a lot of information about star formation, but it’s a slow process by human standards. For that reason, researchers at the Institute for Theory and Computation at the Center for Astrophysics simulate the details of star formation on computers.

The Milky Way is full of clouds of gas and dust, which are the places where new stars and planets are born. These molecular clouds clump together and break apart over time, such that understanding their evolution requires observing them at various stages of their lives. However, much of the light emitted by these clouds is blocked by Earth’s atmosphere. To get above most of the light-blocking air, NASA’s Stratospheric Terahertz Observatory (STO) is an infrared telescope flown on a special high-altitude balloon 40 kilometers (25 miles) over Antarctica. Center for Astrophysics | Harvard & Smithsonian researchers were involved with the development of the first STO mission, which flew for 14 days in 2012; the second mission, STO2, operated for three weeks in 2016.