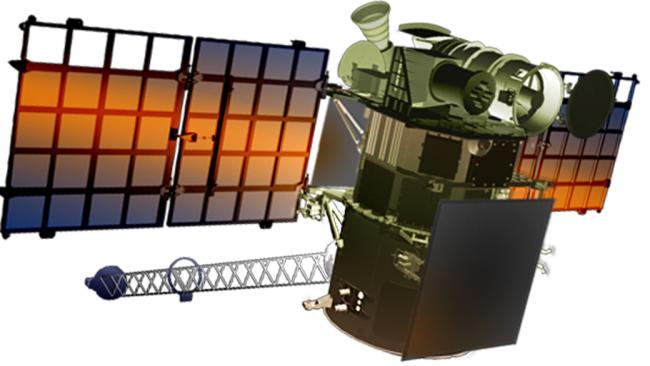 Artist's rendition of NOAA's Deep Space Climate Observatory, which orbits the Sun to monitor the solar wind and variations in Earth's atmosphere.

DSCOVR (pronounced “discover”) is two missions in one: a whole-Earth observatory to track global weather conditions and atmospheric quality, and a space weather forecasting station. In its first role, DSCOVR monitors ozone levels, cloud coverage, air pollution, and fluctuations in the sunlight Earth reflects back into space. As a space weather station, DSCOVR’s instruments measure the number and speed of electrically charged particles in the solar wind, providing early warnings to Earth about solar storms, which have the potential to interfere with satellites, telecommunications, and power grids.

DSCOVR was launched in 2015, and has provided constant updates about conditions on Earth. The spacecraft orbits the Sun at a special stable position known as the first Lagrange point (L1) about 1.5 million kilometers along the line between Earth and the Sun. From L1, Earth’s daytime side is always in view, allowing DSCOVR to measure reflected sunlight. That vantage also means solar wind reaches DSCOVR between 15 minutes to an hour before Earth does, so the observatory acts as an early-warning system for solar storms.

CfA researchers jointly operate one of DSCOVR’s plasma measurement instruments, a device called  a “Faraday cup”. This measures the density, temperature, speed, and flow direction of positively-charged solar wind particles: protons, helium nuclei, and the small number of heavier ions streaming from the Sun. DSCOVR’s other solar wind detectors track the magnetic field carried by the wind, providing a complete set of measurements of particle flow. In addition to providing the early-warning service about solar storms, DSCOVR helps solar physicists learn what drives the solar wind to its high speeds.

DSCOVR carries two other instrument suites: the Earth Polychromatic Imaging Camera (EPIC) and National Institute of Standards and Technology Advanced Radiometer (NISTAR). EPIC takes full-Earth images in ten different wavelengths of light, providing real-time data in visible, infrared, and ultraviolet light. These data allows tracking of air pollution, cloud coverage, vegetation, and other quantities that change over time. Full-Earth “Blue Marble” images are available on the EPIC website. NISTAR measures the amount of radiation coming from Earth, most of which is reflected sunlight, but also emissions due to human activity.