Space doesn’t have air, but it does have weather. This weather comes from the Sun: the high-energy light emitted by the Sun and the electrically charged particles known as the solar wind, which can have a profound effect on Earth and other worlds in the Solar System. Researchers study fluctuations on the Sun’s surface and in its atmosphere to understand the origins and dynamics of space weather. Studying space weather provides insights into the behavior of the Sun as a star, and helps us understand how the Sun affects the planets, asteroids, and other Solar System bodies. 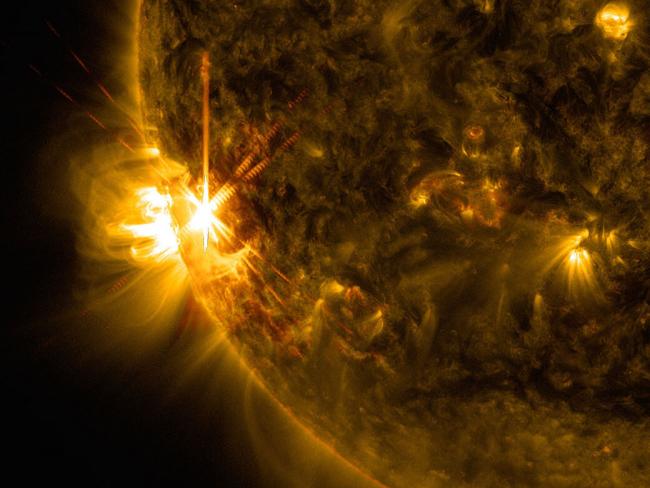 A solar flare observed by NASA's Solar Dynamics Observatory (SDO). These flares eject large amounts of electrically-charged particles into the Solar System, contributing to the set of phenomena known as "space weather".

Most weather on Earth is ultimately driven by the Sun: everything from wind to rain patterns comes from the way the Sun heats different parts of the planet. Space weather also comes from the Sun, in the form of fluctuations in the solar radiation — sunlight — and the solar wind.

The electrically charged solar wind particles mostly come from the Sun’s corona: a fluctuating envelope of material extending far beyond the Sun’s surface. The corona is millions of degrees in temperature, much hotter than the surface. This high temperature strips electrons from atoms, producing a plasma, and the Sun’s gravity can’t hold these particles in. The result: solar wind, which flows outward at varying degrees of strength, depending on the corona’s behavior.

Earth’s magnetic field protects us from most of those charged particles, creating a “bow shock” as we orbit the Sun. The particles that get through to the atmosphere produce auroras near the poles: the northern and southern lights. During a solar flare, the amount of X-ray light the Sun emits can increase by a factor of a million. This excess light strips electrons from atoms in the layer of Earth’s upper atmosphere known as the ionosphere, affecting radio communications — often improving them.

The solar wind flows all the time, but during some periods, it can get much stronger. Over a period of approximately eleven years, the Sun’s magnetic field winds and unwinds around the surface of the star. The winding produces places of extreme tension, which can erupt in huge loops of plasma and an overflow of charged particles, driving the solar wind into a storm.

The largest of these storms are coronal mass ejections (CMEs), which can spew billions of tons of material into space in a matter of hours. Most of these eruptions miss Earth, but in the past CMEs have caused mass electrical blackouts and forced airplanes to change routes. One major reason to study space weather is to predict major CME events and prevent damage to power, transportation, and communication networks.