Why the Sun’s corona — the wispy outermost atmosphere — is so much hotter than its surface stands as a big mystery in solar science. NASA’s High-Resolution Coronal Imager (Hi-C) is an ultraviolet telescope designed to help solve the mystery, and understand the processes by which the Sun sends violent storms of particles into the Solar System. Since most of the light from the Sun’s atmosphere is blocked by air molecules on Earth, Hi-C is carried on a short-flight rocket into Earth’s upper atmosphere. Since 2012, Hi-C has flown three times, providing the highest resolution images of the corona and revealing new details in the Sun’s atmosphere. Hi-C is jointly operated by NASA's Marshall Space Flight Center (MSFC) and the Center for Astrophysics | Harvard & Smithsonian, with contributions from other researchers around the world. 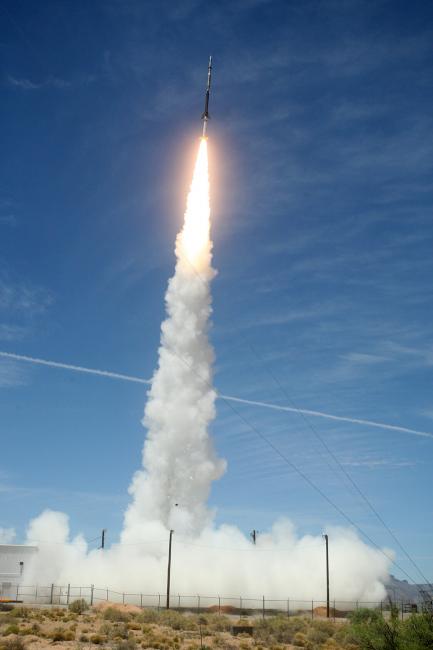 A sounding rocket carrying the Hi-C solar telescope launched from the White Sands Missile Range in New Mexico on May 29, 2018. The rocket took Hi-C into Earth's upper atmosphere, where far less ultraviolet radiation is blocked.

The Sun’s corona can reach temperatures more than a thousand times greater than those on the surface, which means some process is heating material as it travels outward. How that process works is one of the most enduring mysteries in solar physics, but it’s also relevant to life on Earth: the corona is the source of solar storms that can wreak havoc on satellites and power grids.

The corona is only visible to the human eye during a total solar eclipse, but it shines brightly in ultraviolet (UV) light. Since Earth’s atmosphere blocks most UV radiation, corona observations require either space telescopes, which are expensive, or high-altitude rockets, which can be constructed more cheaply but are limited in the amount of time they can observe.

For Hi-C, NASA follows the rocket strategy. This ultraviolet observatory was designed to provide the highest-resolution images of the corona ever taken, using a Black Brant IX sounding rocket to carry the Hi-C into the upper atmosphere. These flights only last just over ten minutes, but the instruments are powerful enough to make the most of that time. Hi-C has flown three times: in 2012, 2016, and 2018, with an improved camera used on the third flight.

During the five minutes of observing time, Hi-C’s third observation used its 24-centimeter (9.5-inch) mirror to capture roughly one image of the corona every five seconds. This flight was conducted in tandem with an observation by NASA’s Interface Region Imaging Spectrograph (IRIS) spacecraft to provide a complete set of data on the Sun’s state at that time. With these high resolution images, scientists discovered new magnetic activity within the Sun’s corona, which may be responsible for the high temperatures in the plasma.

Hi-C is operated collaboratively between NASA’s Marshall Space Flight Center and the CfA, with contributions from Lockheed Martin, the University of Central Lancashire in the UK, and NASA’s Wallops Flight Facility.