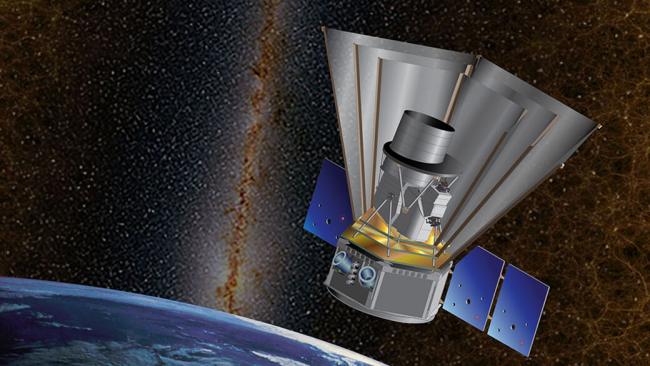 This artist's impression of SPHEREx shows the spacecraft as it will appear when in orbit around Earth. During its 27-month mission, SPHEREx will conduct four all-sky surveys to study the early history of the cosmos and identify interstellar versions of the molecules responsible for life as we know it.

Astronomy operates in two basic ways: broad surveys designed to study as much of the sky as possible, and deep focused observations. SPHEREx is in the first category: it will map the entire sky in infrared light four times during its 27-month mission. Its scientific mission has three parts:

As a space telescope, SPHEREx will have a mostly unimpeded view of the sky, not limited to one hemisphere or by weather and other problems created by the atmosphere. That makes the observatory complementary to the other next-generation telescopes, including NASA’s James Webb Space Telescope (JWST) and the ground-based Giant Magellan Telescope (GMT). These observatories will be valuable for following up on interesting sources identified by SPHEREx.

The mission is designed to have no moving parts. The scientific instrument on SPHEREx is a spectrophotometer, which measures both the spectrum of light emitted by a source and the quantity of light at each wavelength. The telescope will cover successive small patches of the sky, obtaining about 14 billion separate spectral measurements on each of its four surveys.