The universe began 13.8 billion years ago, and in its early years, it looked completely different than it does now. For nearly 400,000 years, the entire cosmos was opaque, which means we have no direct observations of anything that happened during that time. Even after the universe became transparent, it was still a long time before the first stars and galaxies formed, leaving us with limited information about that period. Despite those problems, the early epochs of cosmic history are essential for everything that came after, leading researchers to find ways to figure out exactly what happened when our universe was in its infancy.

Center for Astrophysics | Harvard & Smithsonian scientists study the early universe in a variety of ways:

Until roughly 380,000 years after the Big Bang, the entire universe was a thick opaque cloud of plasma of electrons and nuclei. As the universe expanded, it cooled off enough to let the plasma become atoms, and the cosmos became transparent. We observe the light from this time as the cosmic microwave background (CMB).

The CMB is remarkably uniform in temperature all across the sky, which is surprising. Usually for two things to be exactly the same temperature, they need to be in contact. However, two points on the CMB on opposite sides of the sky would never have been close together since the Big Bang — unless something else was going on to connect them.

The most widely accepted hypothesis for that “something else” is cosmic inflation. In a tiny fraction of a second after the Big Bang, quantum fluctuations drove the universe to “inflate” much faster than the rate we observe at later eras. The part of the cosmos that became our observable universe was smaller than it would seem today, so the points opposite to each other on the sky now would have been in contact before inflation happened.

Much of the research on inflation involves understanding how it worked, and determining how we can detect its effects. For example, inflation would have created gravitational waves in the early universe, leaving small but potentially observable traces in the CMB. Observatories such as the South Pole Telescope (SPT) are looking for these effects. 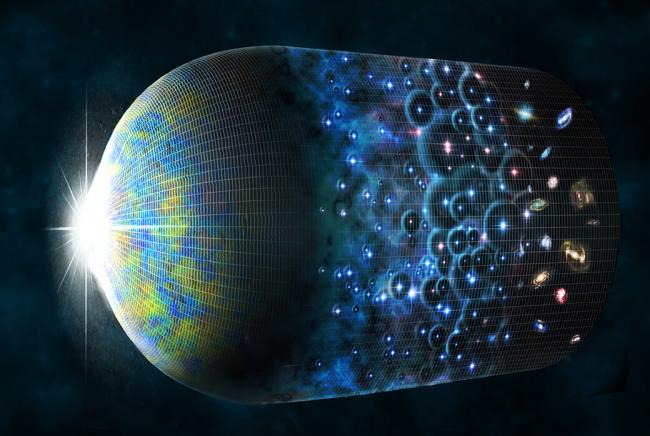 This artist's impression traces the early history of Universe from with the Big Bang on the left to the first galaxies on the right. The black region in the middle is the "dark ages", the mysterious era setting the stage for the first stars to be born.

When the CMB formed, the ordinary matter in the universe transitioned from a hot opaque plasma to incandescent hydrogen and helium gas. Astronomers call this the “dark age” of the universe, since no stars had formed yet.

Researchers are using the best observatories in the world both to study the dark age and to find evidence for the first stars in the universe. As the first stars and black holes formed, they turned much of the hydrogen gas in the universe into plasma again, a process astronomers call “reionization”. The environment producing the earliest stars was radically different than star-forming regions today. The raw ingredients were almost exclusively hydrogen and helium, since stars themselves produce heavier elements through nuclear fusion.

Astronomers think the first stars may have been very massive compared with modern stars, and may have formed the first black holes in the cosmos. Individual stars are too small to be seen from so great a distance, so researchers look for indirect evidence about the nature of these objects, through how they influenced their surroundings.

Studying the dark ages and first stars is a way to understand the genealogy of all stars, including our own Sun. These original stars began the process of making most of the elements heavier than helium, which includes the atoms like oxygen and carbon necessary for life. The earliest stars, galaxies, and black holes changed the cloudy universe of the dark ages into the vast cosmic structures we see today.

Astronomers Identify Some of the Earliest Galaxies in the Universe

Does Some Dark Matter Carry an Electric Charge?