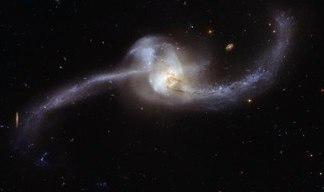 A Hubble image of the luminous merging galaxy system, NGC 2623.  Astronomers have determined the fraction of a galaxy's total luminosity powered by its starbursts and its active galactic nucleus (AGN) in 189 luminous galaxies and reevaluated the relationship between a galaxy's mass and its star formation rate.

The most luminous galaxies in the universe can be over a thousand times brighter than our Milky Way. They are not particularly bright in the optical, however, because most of their radiation is at infrared wavelengths. The massive starbursts that help power them are buried in molecular complexes whose dust absorbs most of the ultraviolet and optical light and reradiates it in the infrared. Two questions drive much of the research on these galaxies: What prompts this dramatic activity, and might it also stimulate the supermassive black hole at the galaxy's nucleus to contribute to the powerful emission, making it an active galaxy nucleus (AGN)?

Galaxy-galaxy interactions have long been known to influence galaxy evolution. They are commonplace events, and a majority of galaxies show some signs of interactions, including tidal tails or other morphological distortions. In many cases there are indications that luminous hyperactivity is induced by a collision. Collisions, though, should also stir up the gas in a galaxy and stimulate the transport of material onto the supermassive black hole. Astronomers today therefore think that both star formation and AGN activity power luminous galaxies. The two processes should be distinguishable, however. AGN produce much hotter ultraviolet and X-ray radiation, for example. Astronomers can use the shape of the galaxy’s emission profile, its spectral energy distribution (SED) spanning the ultraviolet to the far infrared, to diagnose what is going on.

CfA astronomers Andrés F. Ramos-Padilla, Matt Ashby, Howard Smith, Rafael Martínez-Galarza, Aliza G. Beverage, Jeremy Dietrich, and Aaron Weiner have just published the results of a large study of 189 luminous galaxies, most of them merging systems. The team re-reduced the many datasets (as many as 34) needed to produce as systematic, self-consistent and detailed shape of the SEDs at wavelengths from the ultraviolet to the far infrared, and then modeled each SED using a computational code that quantifies the various processes and parameters, not only star formation rates and AGN activity but also stellar masses and evolutionary state, dust properties, and accretion details. In particular, the team investigated the fraction of the total luminosity that derived from the AGN versus the starburst, and compared that to other galaxy properties.

The astronomers found that in about half of their sample, a galaxy's AGN contributed significantly (more than 20%) to the total luminosity. As a result, previous studies that used luminosity to infer star formation rates without taking the AGN into account are in error. Moreover, conclusions about galactic evolution based on comparing galaxies' masses and star formation rates (the so-called "main sequence of galaxies") are also inaccurate unless corrections were made for the AGNs' contributions to luminosity. Not least, the scientists obtain a corrected "main sequence" of galaxies and discover several outlier galaxies in the otherwise tight correlation. They suggest that the processes in such outliers might be more commonplace in luminous galaxies in the early universe, when star formation is known to have been much more active.