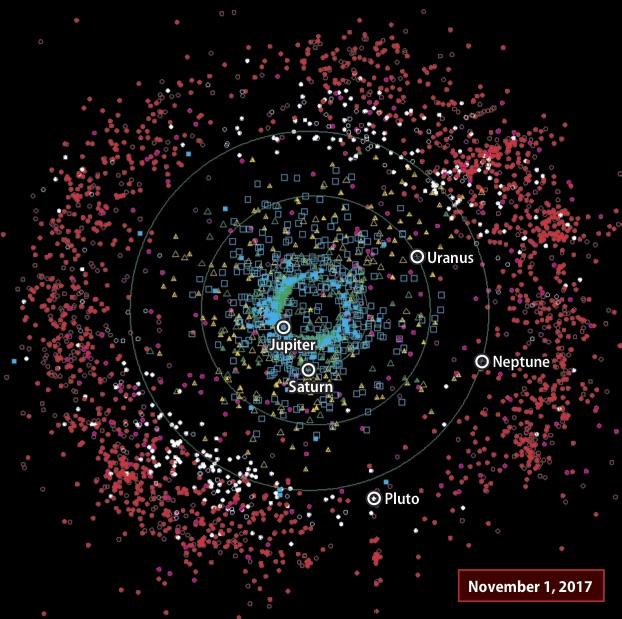 A schematic of the Kuiper Belt showing the location of thousands of classical Kuiper Belt Objects (KBOs, in red). (White dots are KBOs in resonance with Neptune; magenta dots are scattered disk objects; other symbols are objects not in the Kuiper Belt.) Astronomers find that a subset of blueish KBOs are all binaries and were probably pushed into their orbit during the migration of Neptune.

The Kuiper Belt is a disk of small icy bodies, thought to be remnants of the early Solar System, that circles the Sun from the orbit of Neptune (about 30 astronomical units, AU, from the Sun) to about 50 AU. KBOs orbit at significant inclination angles with respect to the plane of the planetary orbits. Those called classical KBOs orbit within a specific range of distances from Neptune, and a subgroup of them, called cold classical KBOs (CCKBOs), has very low inclination angle, less than about six degrees. Astronomers think that CCKBOs are dynamically pristine, that is, they formed in-situ rather than having been scattered into their orbits by Neptune or other processes. Their low inclination angle reflects this history.

CCKBOs are generally reddish in color, the result of their composition, and nearly 30% of them are found in widely separated binary pairs. Recently a rare subgroup of CCKBOs has been identified that are distinctly bluer in color, and 100% of these are in binary pairs. CfA astronomers Rosemary Pike, Mike Alexandersen, and Matthew Lehner were members of the Col-OSSOS team (Colours of the Outer Solar System Origins Survey) that has that has acquired optical color measurements of 98 KBOs, bringing the total number of CCKBOs with accurate photometry measurements from 87 to 113. With the large sample of CCKBO colors, the team was able to identify a correlation between color and binarity.

The scientists argue that these blue CCKBOs are "push-out survivors," emplaced into the region with other classical KBOs when Neptune migrated outward in its orbit, and not pristine. Using simulations and statistical tools, they conclude that the majority of objects that formed in the classical region must have formed as binaries and remained together, even though they are widely separated and hence dynamically fragile. The simulations strengthen the case that these blue survivors were pushed-out. The astronomers argue that further study of these blue objects will help reveal details of the path Neptune took as it migrated in the early days of the Solar System.