The Solar System is littered with small objects made of rock and ice. These are the comets and minor planets — asteroids, Kuiper Belt objects, and other tiny fragments left over from the time when the Solar System was first born. We can’t witness the birth of the Solar System, but minor planets and comets provide us with a glimpse of the conditions when the planets formed, and the origins of many of the chemicals that made up early Earth.

Center for Astrophysics | Harvard & Smithsonian researchers study comets and minor planets in a number of ways: 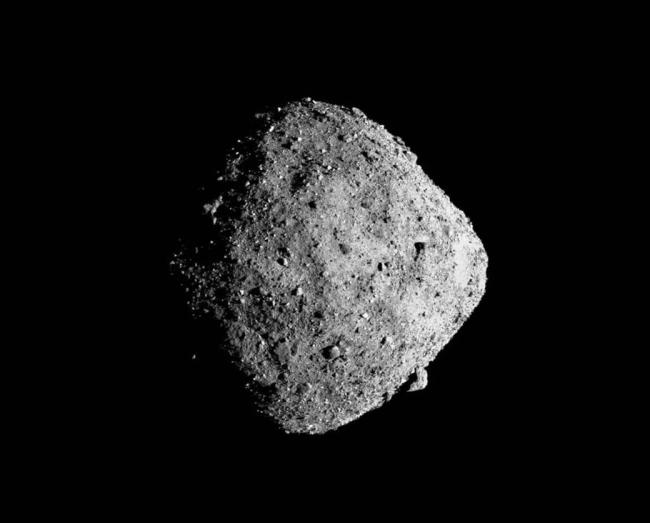 The near-Earth asteroid Bennu as seen by the OSIRIS-REx spacecraft from a distance of about 8 miles (13 km). CfA students collaborated on the construction of one of the instruments aboard OSIRIS-REx.

History in the Rock and Ice

The Solar System formed from a cloud of gas and dust about 5 billion years ago, which collapsed into a rotating protoplanetary disk. Over time, the material formed planetesimals: small chunks of rock and ice. Some of those planetesimals collided with each other, eventually growing to become the major planets. However, many stayed small, drifting between the larger worlds. These are the comets and minor planets, which is a catch-all category for everything in the Solar System that isn’t a planet, moon, or comet. The minor planets include the asteroids, Pluto and other icy worlds beyond Neptune, and a diverse host of other bodies.

Minor planets and comets cover a wide range of sizes, shapes, and chemistry, but one thing they have in common: they are potentially pristine — or nearly so — remnants of the protoplanetary nebula. By studying these fragments of history, researchers can determine the atoms and molecules present at the birth of the Solar System.

Comets are mixtures of ice, rock, and dust, which often loop through the Solar System in very elongated orbits. “Ice” to an astronomer includes volatile materials like carbon dioxide and methane, along with water ice. When comets pass into the inner Solar System, those ices sublimate into gas, forming the familiar distinctive tail. The melting process also kicks up dust particles, forming a second tail that interacts with particles from the solar wind.

While the bright icy tail is the most obvious visible feature, the comet’s nucleus is often very dark, due to the presence of organic molecules. Because comets are probably the most undisturbed planetesimals from the early Solar System, their chemistry is a glimpse at the environment before the planets were born. To put it simply: by looking at comets, we get a peek at the protoplanetary nebula.

Scientists study how sunlight and solar wind particles affect the molecules on the comet surface. Those interactions can generate X-rays, as well as heating the material to produce other sorts of light. That enables researchers to measure various chemical abundances, to compare between comets and with other worlds in the Solar System — including Earth.

There are many types of minor planets, all of which are interesting in their own way. The icy bodies of the outer Solar System, including Kuiper Belt objects (KBOs), are like comets in many ways, but unique in others. For example, Pluto shows signs of changing surface features, which makes it seem more like inner Solar System objects than a pristine remnant from the days planets first formed.

Asteroids typically spend more time close to the Sun than comets do, so most of the ice they may have had near their surfaces is gone. Those changes to asteroid chemistry make them less pristine, but no less interesting as remnants of the planetesimal era of the Solar System.

Researchers are particularly interested in near-Earth objects (NEOs), partly because their proximity to us makes them easier to study, but also because these are potentially hazardous. Various craters on Earth are the scars from impacts in the past, including the famous Chicxulub crater off the coast of Mexico, which either caused or helped speed the extinction of the non-bird dinosaurs. Both the Tunguska event of 1908, which flattened a whole forest, and the Chelyabinsk meteor of 2013 show that even relatively small NEOs can cause noticeable damage.

While astronomers have ruled out immediate danger of global catastrophe, the Solar System is just unpredictable enough that they study potentially dangerous NEOs, including those of smaller size. Part of understanding the risk is seeing how sunlight affects asteroids, moving them slightly in their orbits and changing how they spin. Studying these effects helps not only predict how NEO orbits might change, but also potentially how spacecraft might nudge dangerous asteroids away from Earth in the future.

The Center for Astrophysics is host to the Minor Planet Center, a research center focused on studying and tracking asteroids, along with comets, moons, and other minor planets in the Solar System. It’s a clearinghouse of measurements of the orbits and properties of these worlds, along with regular news updates on discoveries made by amateur and professional scientists all over Earth.