Making Stars When the Universe was Half Its Age 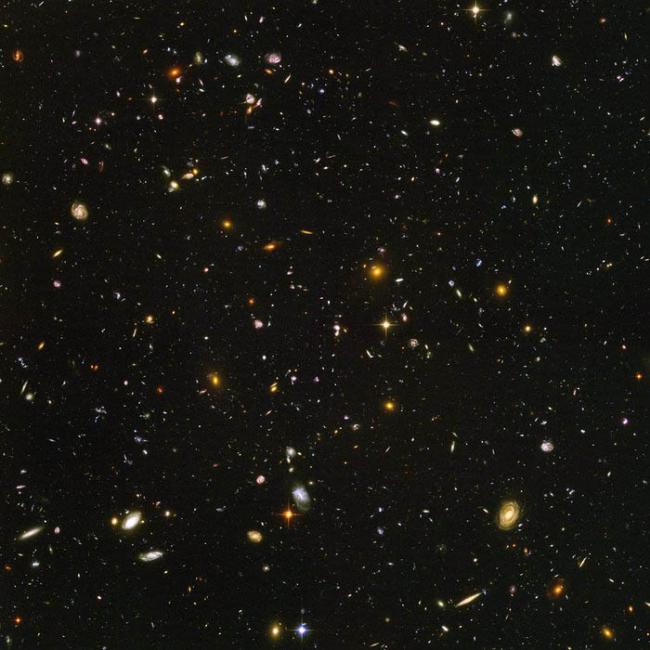 The Hubble Ultra Deep Field of galaxies. A new study of the star formation activity in 179 of the galaxies in this image including many dating from about six billion years ago confirms an earlier puzzling result: lower mass galaxies tend to make stars at a rate slightly slower than expected.

NASA, ESA, and S. Beckwith (STScI) and the HUDF Team

The universe is about 13.8 billion years old, and its stars are arguably its most momentous handiwork. Astronomers studying the intricacies of star formation across cosmic time are trying to understand whether stars and the processes that produce them were the same when the universe was younger, about half its current age. They already know that from three to six billion years after the big bang stars were being made at a rate roughly ten times faster than they are today. How this happened, and why, are some of the key questions being posed for the next decade of research.

Star formation in a galaxy is thought to be triggered by the accretion of gas from the intergalactic medium (gas accretion via mergers between galaxies is thought to play a relatively minor role in the total numbers of stars produced). In galaxies that are actively making stars there is a tight relationship between their mass in stars and their rate of forming new stars, and this relationship approximately holds not only locally but even back when the universe was billions of years younger. In contrast, galaxies that are undergoing an active starburst - or the opposite, the quenching of star formation - fall above and below that relation respectively. The relationship supports the general picture of galaxy growth by gas accretion, except that for some reason smaller galaxies – those with fewer than about ten billion stars – seem to make slighter fewer stars than expected for their masses (the Milky Way is right at the turnover, with about ten billion stars and a rate of roughly one new star per year). A particularly significant consequence of this paucity, if real, is that simulations of galaxy growth do not show it, implying that the simulations are incorrect for smaller galaxies and that some physics is missing.

CfA astronomer Sandro Tacchella is a member of a team that used the Multi Unit Spectroscopic Explorer instrument on the VLT (Very Large Telescope) to obtain optical spectra of galaxies in the famous Hubble Deep Field South image of galaxies. They measured stellar emission lines in 179 distant galaxies in the field and used them to calculate the star formation behaviors after corrections for effects like dust extinction (which can make some of the optical lines appear weaker than they are). The find that the puzzle of depleted star formation in small galaxies is real at a level of roughly 5% even when accounting for noise and scatter in the data caused, for example, by galaxy evolution effects. The authors suggest that some kind of previously unaccounted for feedback may be responsible.