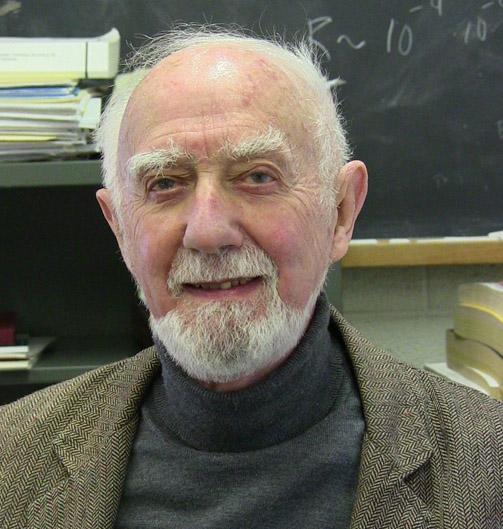 Alex Dalgarno was a truly exceptional person and scientist. World renowned, he was widely considered the father of theoretical atomic and molecular astrophysics, a field that continues to thrive.

Born in London, a fraternal twin, the last of five children of his parents, Alex described his childhood as happy and contented. He especially enjoyed playing soccer. At the end of his secondary schooling, he was invited to try out for the Tottenham Hotspur Football Club in London. This event morphed into the local legend that he then faced a critical decision about whether to pursue a career as a mathematician or professional footballer. He made the right choice and proceeded to gain a bachelor’s degree in mathematics at University College London, capitalizing on his exceptional mathematical skills and prodigious memory. When Alex was about to graduate, a chance encounter in 1947 with Sir Harrie Massey, future chair of the Physics Department there, persuaded Alex to switch to theoretical physics for his graduate work. He seized upon this opportunity to use mathematics to interpret experimental data and thereby to solve interesting physics problems.

Alex completed his doctorate in 1951 and was offered his first professional appointment in Belfast by David, later to become Sir David, Bates. At about the same time, rocket flights were making direct observations of the physics and chemistry of the upper atmosphere. To understand these data, Alex developed analytical and numerical techniques for calculating results from an array of radiative and collisional processes. Alex’s forays into perturbation theory, applied to the study, for example, of line broadening and the direct calculation of atomic and molecular polarizabilities became enormously fruitful in those years. Much later, in the 1990s, after Bose-Einstein condensates became feasible, Alex’s methods found new utility in understanding the collisional properties of quantum matter at temperatures near absolute zero.

After several long stays in the United States, Alex came permanently to Cambridge in 1967, having accepted a joint offer from Harvard as Professor of Astronomy and from the Smithsonian as Senior Scientist at its Astrophysical Observatory, then and still collocated with the Harvard College Observatory. It took little time for his extraordinary abilities to be appreciated. He was appointed Chair of the Department of Astronomy and served from 1971 to 1976, and, overlapping, Acting Director of the Harvard College Observatory from 1971 to 1973, with the last part of that period also as Acting Director of the Harvard-Smithsonian Center for Astrophysics. Alex also played an important role in the selection of George Field as its first director.

Read more at the Harvard Gazette