The planet is rocky and almost precisely the same size as Earth, but the star it orbits is only 30 percent the size of the Sun. 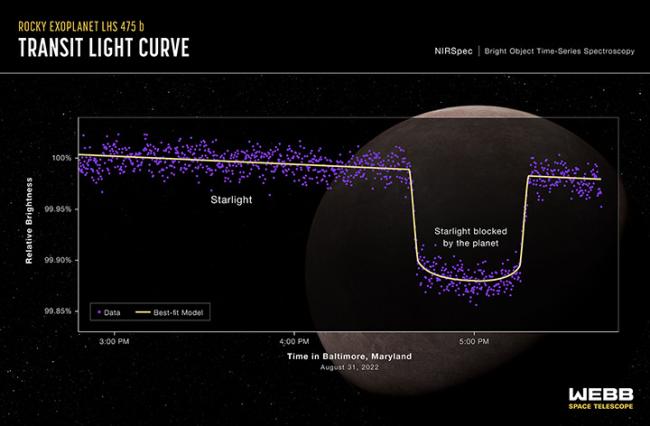 A team has confirmed that exoplanet LHS 475 b not only exists, it is a small, rocky planet that — at 99 percent of Earth's diameter — is almost exactly the same size as Earth. The team includes astrophysicist Mercedes López-Morales, and PhD students Kevin Ortiz Ceballos and Jéa Adams of the Center for Astrophysics | Harvard & Smithsonian.

The team's results were presented at a press conference today at the 241st Meeting of the American Astronomical Society (AAS).

Before JWST, researchers typically observed and targeted planets that were larger than Jupiter, which is 11 times wider than Earth. Today's result will inevitably be the first of many discoveries JWST data helps researchers make as they continue exploring planets elsewhere in our Milky Way galaxy.

The team chose to observe this target with JWST after carefully reviewing targets of interest from NASA's Transiting Exoplanet Survey Satellite (TESS), which hinted at the planet's existence.

"The idea of the project was to observe in detail a planet that we knew would be rocky, to see if we could detect its atmosphere," says López-Morales, "LHS 475 b was a good candidate, but with TESS alone we could not confirm what star it was orbiting around."

JWST's Near-Infrared Spectrograph (NIRSpec) captured the planet easily and clearly with only two transit observations. "There is no question that the planet is there. JWST's pristine data validate it," says Jacob Lustig-Yaeger.

"The fact that it is also a small, rocky planet is impressive for the observatory," Kevin Stevenson adds. Stevenson and Lustig-Yaeger, both of the Johns Hopkins University Applied Physics Laboratory in Laurel, Maryland, are the project leads.

Among all operating telescopes, only JWST is capable of characterizing the atmospheres of Earth-sized exoplanets. The team attempted to assess what is in the planet's atmosphere by analyzing its transmission spectrum. Although the data show that this is an Earth-sized terrestrial planet, they do not yet know if it has an atmosphere.

"The telescope is so sensitive and the data are so precise that we could have easily detected several different molecules, but we don’t see much yet," says Harvard graduate student Ortiz Ceballos, who performed one of the three independent data analyses.

Although the team can't conclude what is present, they can definitely say what is not present. "There are some terrestrial-type atmospheres that we can rule out," explains Lustig-Yaeger. "It can't have a thick methane-dominated atmosphere, similar to that of Saturn's moon, Titan."

The team also notes that, while it’s possible the planet has no atmosphere, there are some atmospheric compositions that have not been ruled out, such as a pure carbon dioxide atmosphere.

JWST also revealed that the planet is a few hundred degrees warmer than Earth, so if clouds are detected, it may lead the researchers to conclude that the planet is more like Venus, which has a carbon dioxide atmosphere and is perpetually shrouded in thick clouds.

"This is just the beginning, but a huge step forward in the study of small, rocky planets," says López-Morales. "With more data on this and other small planets we will soon be able to tell what their atmospheres are made of."

The researchers also confirmed that the planet completes an orbit in just two days, information that was almost instantaneously revealed by JWST's precise data. Although LHS 475 b is closer to its star than any planet in our Solar System, its red dwarf star is less than half the temperature of the Sun, so the researchers project it still could have an atmosphere.

At only 41 light-years away, exoplanet LHS 475 b is relatively close in Octans, a constellation in the southern sky.

The JWST is the world’s premier space science observatory. JWST will solve mysteries in our solar system, look beyond to distant worlds around other stars, and probe the mysterious structures and origins of our universe and our place in it. JWST is an international program led by NASA with its partners, ESA (European Space Agency) and CSA (Canadian Space Agency).