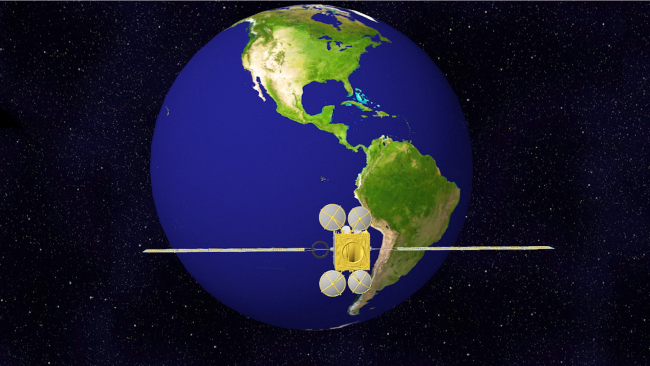 The Tropospheric Emissions: Monitoring of Pollution (TEMPO) instrument, an Earth science space instrument that will measure air pollution over North America, has successfully completed development by Ball Aerospace and Technologies Corp. in Boulder, Colorado and has been formally accepted by NASA.

NASA and TEMPO Principal Investigator Kelly Chance from the Smithsonian Astrophysical Observatory (SAO) in Cambridge, Massachusetts, partnered with Ball to design, manufacture and test this new Earth science instrument. According to Chance, "TEMPO exploits more than thirty years of our development of ultraviolet and visible atmospheric spectroscopy to make air quality measurements at revolutionary spectral and spatial scales." The rigorous environmental test campaign conducted by Ball verifies that TEMPO will survive all of the challenges related to launch, as well as sustained operations in Earth’s orbit.

TEMPO will be the first space-based instrument to monitor major air pollutants across the North American continent hourly during daytime. In doing so, it will revolutionize air quality forecasts and emission control strategies, and enable effective early public warning of pollution events.

"With completion of the instrument and full spaceflight qualification by Ball, we are extremely excited about the acceptance of TEMPO, which will lay the framework for NASA and SAO's critical air quality measurements," said TEMPO Project Manager Stephen Hall at NASA's Langley Research Center in Hampton, Virginia.

TEMPO will make observations from a geostationary vantage point, about 22,000 miles above Earth's equator, flying on a commercial spacecraft. The instrument will be installed on the Earth-facing portion, allowing for an unobstructed view to collect measurements. While NASA has taken over ownership of the TEMPO flight hardware, the instrument will remain in storage at Ball while a host spacecraft is selected.

TEMPO is the first instrument to be awarded by NASA's Earth System Science Pathfinder Program in the Earth Venture Instrument (EV-I) Class Series. TEMPO is a UV-visible spectrometer, sensitive to visible and ultraviolet wavelengths of light. It detects pollutants and other elements of atmospheric chemistry by measuring sunlight reflected and scattered from the Earth’s surface and atmosphere back to the instrument’s detectors.

Learn more about the science behind the TEMPO instrument in a video produced by SAO: http://tempo.si.edu/. This release is being issued jointly with NASA.