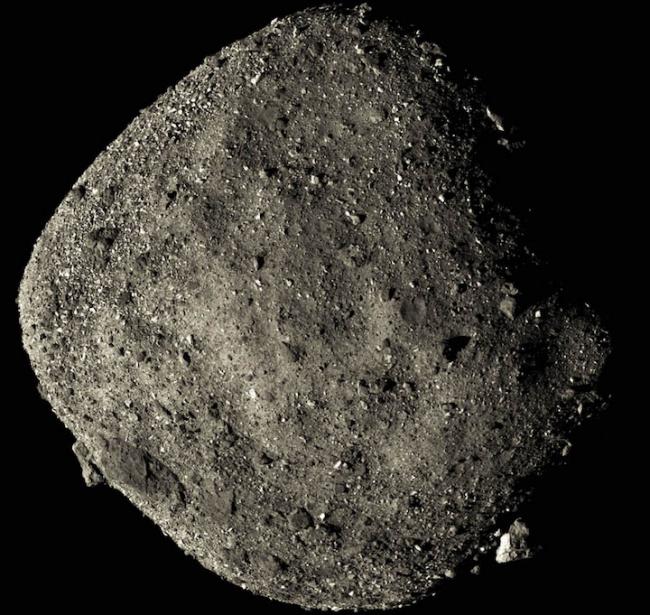 A composite photograph of the near-Earth asteroid 101955 Bennu as seen from the OSIRIS-REx spacecraft. Astronomers have recently concluded in two cases that pairs of NEOs are physically ("genetically") related, having broken apart from the same parent asteroids less than ten thousand years ago.

Near Earth Objects (NEOs) are small solar system bodies whose orbits sometimes bring them close to the Earth, making them potential collision threats. NEOs also offer clues to the composition, dynamics and environmental conditions of the early solar system and its evolution, and because they are relatively close to the Earth they lend themselves to astronomical measurements. Most NEOs are discovered in optical searches, but one crucial NEO parameter, its size, usually cannot be determined from optical detections alone. This is because an NEO's optical light is reflected sunlight, and an object can be bright either because it is large or because it has a high reflectivity. A CfA team has been using the IRAC infrared camera on Spitzer to measure NEO infrared emission signals which provide an independent measure of its size.

CfA astronomer Joe Hora is a member of a team of scientists who realized that four recently studied NEOs are actually two pairs of objects, each pair consisting of two "genetically related" asteroids of similar composition and size. The pairing was confirmed when optical and near-infrared spectroscopy found that each of the two NEOs were so similar, composed of dehydrated and volatile-poor rocks, suggesting a common origin. The question then became: What was their origin? Thermal fragmentation is unlikely for objects of this composition, while a tidal disruption or collisional origin are seen as unlikely given their modeled orbital paths through the solar system.

The scientists argue that the most likely cause for breakup is the YORP mechanism, an acronym derived from the last names of the four scientists who proposed it in the 19th century. The mechanism refers to asteroid spin-up as the result of its non-uniform reflection and emission of photons. Photons carry momentum, and when an asteroid is non-uniform in its surface properties, the departing photons can gradually spin it up until eventually it fragments. The team estimates that probably both pairs of NEOs fragmented less than about ten thousand years ago, making them among the youngest known multiple asteroid systems. The astronomers expect that more NEO pairs will be found, thus providing an ideal laboratory for studying time dependent evolutionary processes that are relevant to asteroids throughout the solar system.