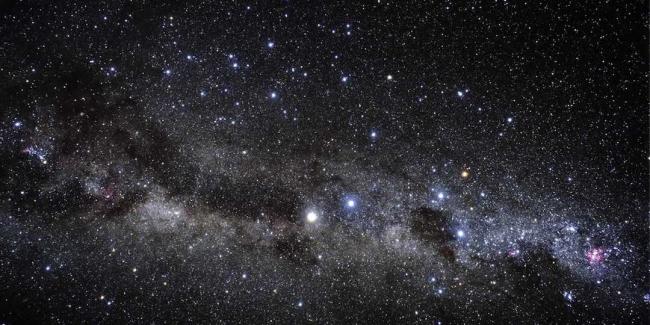 A photo of the Scorpius-Centaurus Association. Astronomers have identified hundreds of new stars in this nearby association that are smaller than the Sun and younger than about 30 million years, and also measured their motions.

Star-forming regions in the Galaxy are distributed in a complex web of filaments. Clusters of stars are born within the densest parts of these structures, but soon after the stars form their motions and mutual interactions in this crowded environment result in nearly 90 per cent of them moving apart, becoming gravitationally unaffiliated with the cluster. The resultant loose ensembles of dispersing, coeval stars are called stellar associations, and they retain the kinematic imprints of their local birth sites for as much as thirty million years before merging into the galactic disc. Because these groups of hundreds to thousands of stellar siblings were born from the same molecular cloud, their members have similar chemical abundances. These moving groups are the fossil records of the galaxy with the potential to link together star formation sites with larger structures of the galaxy’s disc. Associations thus offer ideal laboratories to study a wide variety of important topics including star and planetary formation environments, the initial mass function, and triggered star formation.

But first, the members of a stellar association need to be identified. In the past astronomers have tried to reconstruct associations by looking at stellar positions, proper motions, and distances (as estimated from ground-based parallax data). CfA astronomer George Zhou was a member of a team that used the dramatic new measurements from the Gaia astrometry mission to improve significantly these measurements and to add one more: radial velocity motions obtained with the Echelle and Wide Field Spectrographs at the Australian National University’s Siding Spring Observatory. The spectrographs not only determined stellar radial motions, their spectra also revealed key atomic features from hydrogen, calcium, and lithium that enabled the team to determine the ages of the young stars.

The astronomers had selected 756 stars known to be closer to us than about six hundred light-years, whose masses are slightly less than the Sun, and whose colors suggest they are young. Indeed, 349 of them turned out to be younger than twenty-five million years, and the youngest were only about ten million years old; most of the sample had not been previously identified as being this young. The scientists conclude that these stars are part of the Milky Way's Scorpius-Centaurus association from their ages and locations. In addition to characterizing these nearby young stars, the new results provide the kinematic information needed for the astronomers to trace back the stars' motions and infer the location of their stellar birthplace.