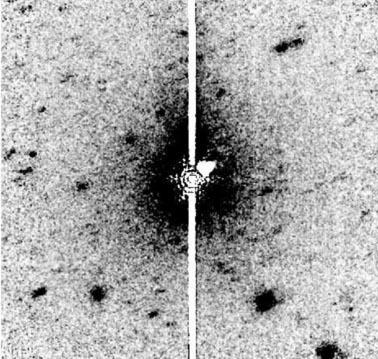 Small objects in the solar system, including both comets and asteroids, have a wide range of dynamical parameters and physical properties. Comets, for example, originate in the outer reaches of the solar system and have icy surfaces that evaporate when approaching the Sun, producing characteristic tails and comas. Asteroids on the other hand lack these volatiles and do not show such behavior. In recent decades, however, this previously strict division between active and inert bodies has blurred as sensitive infrared and other detectors have discovered that objects nominally categorized as asteroids can show signs of comet-like activity.

CfA astronomers Joe Hora and Howard Smith are members of a team that has been using the IRAC infrared camera on Spitzer to study Near Earth Objects, small solar system bodies whose orbits sometimes bring them close to the Earth. Besides being able to measure the surface properties of NEOs, the infrared sensors are also able to spot faint emission from evaporating volatiles. Several years ago the team discovered, for example, that the NEO named Don Quixote (the third largest known NEO), previously thought to be quiescent, was in fact a dormant comet, faintly active with a coma and a tail detectable in the infrared. The result had direct implications for the origins and evolution of the population of NEOs, including objects that follow asteroidal (not cometary) orbits, a group referred to as “Active Asteroids”.

Astronomers are trying to understand whether or not, despite their very different dynamical properties, this class has extended emission as a result of the same mechanisms active in comets; such processes include not only the sublimation of volatiles but also mass shedding through spin-up, impacts, and/or thermal fracturing. The variety of possibilities makes it hard to predict which NEOs might show activity without further information. The CfA astronomers and their colleagues have just published a new paper on two subcategories of these NEOs: dormant comets (aged comets whose reservoirs of volatiles have likely been depleted) and near-Sun asteroids (objects that pass closer than one-tenth of an astronomical unit to the Sun and may be disrupted).

The scientists monitored seventy-five selected dormant comets and six near-Sun asteroids in the optical and infrared from a variety of facilities including IRAC/Spitzer over a period of four years. None of them showed activity. The team was able to quantify the results and further categorize each of the bodies, to conclude among other findings that all of the near-Sun asteroids must be nonprimitive in nature. The implication is that more primitive bodies disrupt relatively easily when they approach the Sun, and those that survive appear to have ungone surface material alterations.