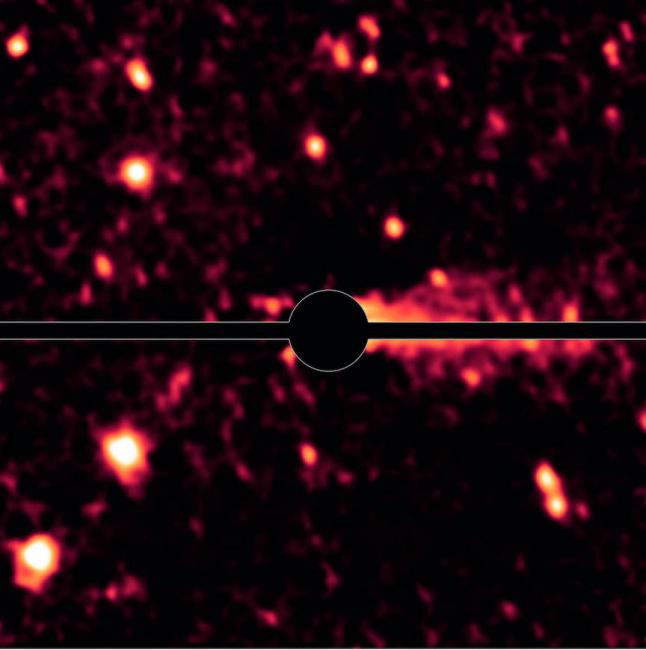 An IRAC/Spitzer infrared image of extended emission from the dormant comet Don Quixote, showing a diffuse, elongated feature centered on the saturated object (the saturated bright core has been artificially blocked to make it easier to see the tail. This NEO, long thought to be an asteroid, was first suspected of being a dormant comet about five years ago.  Since then new IRAC and ground-based observations have detected the tail at several wavelengths and confirmed its status as a comet.

Don Quixote (alias Near-Earth Object NEO 3552) was discovered in 1983.  Subsequent infrared and optical observations measured its diameter as about 18.7 kilometers, making it the third largest known NEO.  Its reflectivity and its orbit suggested to astronomers that it was actually an extinct comet, but it had no apparent comet-like tail and was instead classified as an asteroid.  But physical characterization over the following years revealed further hints at a potentially cometary origin of this body, including infrared observations made with the IRAC camera on Spitzer.

CfA astronomers Joe Hora and Howard Smith, together with a team of colleagues, used Spitzer to study Don Quixote, and in 2014 they reported evidence for extended emission in one of the two IRAC channels. Because the activity was limited and had never been seen at optical wavelengths, the team attributed the activity to a short outburst, perhaps caused by a recent impact.  The group continued to monitor the object when it was visible, including another set of observations with IRAC in 2017 and ground-based observations six months later, in 2018 when Don Quixote was close to perihelion, using optical and submillimeter telescopes. The new IRAC observations found extended emission around the nucleus which the astronomers argue is due to either carbon dioxide or carbon monoxide gas. The slightly later optical observations detected activity for the first time which the astronomers attribute to reflected sunlight from dust particles, probably centimeter-sized, in the object's coma and narrow tail. The submillimeter results also detected emission, but no obvious carbon monoxide line, tentatively ruling out this molecule.  The combined observations support the original conjecture that Don Quixote is a weakly active comet, with recurrent activity, and confirms it as an important member of an unusual class of NEOs.