The Supermassive Black Hole in Our Galaxy 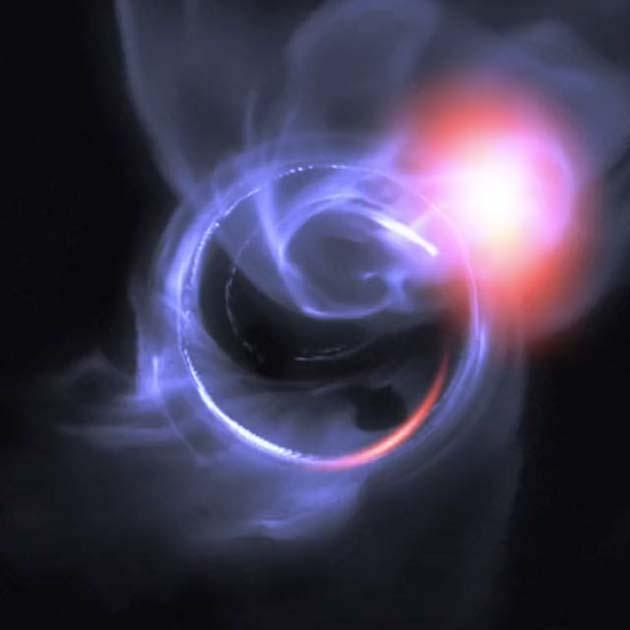 A visualization of simulated flaring activity and clouds of material around the supermassive black hole in the galactic center, SagA*. Astronomers observing these flaring events simultaneously at wavelengths from the X-ray to the submillimeter report evidence that X-ray and/or infrared flaring can occur about 10-30 minutes before submillimeter flaring, consistent with one class of theoretical models.

The supermassive black hole (SMBH) at our galaxy's core, Sagittarius A*, is modest in size with only 4.15 million solar-masses. The Event Horizon Telescope (EHT) recently released a dramatic submillimeter image of it as seen illuminated by its glowing environment. Many galaxies have nuclear SMBHs that are a thousand times bigger, for example the nucleus of M87, whose image was taken by the EHT in 2020. But SagA* is relatively close to us, only about twenty-five thousand light-years, and its proximity offers astronomers a unique opportunity to probe the properties of SMBHs.

As gas and dust slowly accrete onto a black hole’s surrounding hot, disk-like environment they radiate across the electromagnetic spectrum. The episodic accretion and variable radiation bursts offer clues to the nature of the accretion, the dimensions and locations of each event in the black hole’s complex environment (in or near the torus? in some part the wind?), and how the episodes might be related to one another and to properties of the black hole, its spin for example. Each wavelength carries its own information, and one of the key diagnostic tools is the time difference between flares at different wavelengths which trace where in the outburst the different production mechanisms occur. Sag A* is close enough that it has been monitored at radio wavelengths since its discovery in the 1950's; on average Sgr A* accretes material at a very low rate, a few hundredths of an Earth-mass per year, but enough to produce variability as well as more dramatic flares.

CfA astronomers Steve Willner, Giovani Fazio, Mark Gurwell, Joe Hora, and Howard Smith and their colleagues have completed a timing analysis of coordinated, simultaneous near-infrared, X-ray and submillimeter observations of SagA* using the IRAC camera on Spitzer, the Chandra X-ray observatory, the NuSTAR mission, ALMA, and the GRAVITY instrument on the Very Large Telescope Interferometer; the campaign required complex mission planning and the reduction of multiple kinds of datasets. Flaring events were seen between July 17-26, 2019 (unfortunately the SMA was shut down at that time due to protests on the mountain.) The team notes that the 2019 activity seems to reflect an unusually high accretion rate. While some of the events were observed to occur simultaneously, the submillimeter flaring (ALMA) appeared roughly 20 minutes after the infrared and X-ray flares (Chandra).

The scientists consider three scenarios: the infrared and X-ray emission in these flares arose from charged particles spiraling in powerful magnetic fields; the infrared and submillimeter came from this first process, but the X-ray emission was produced when infrared photons collided with charged particles moving near the speed of light; and finally, that only the submillimeter radiation came from the first process and all the other bands were produce by the second. Unfortunately ground-based observations cannot be continuous, and as a result the time of the peak of the submillimeter emission flare was not observed, making it hard to pin down any time-delay between it and the X-rays that could signal its arising in a different location or from a different process. The team, combining its results with earlier variability studies, finds one consistent picture in which the infrared and X-rays originate via the second process followed by submillimeter emission from the first in an expanding, cooling magnetized plasma.