When light in the microwave part of the spectrum shines on gas, sometimes the molecules respond by amplifying it, producing a dramatically brighter object called a “maser”. Naturally-occurring masers are found near stars and supermassive black holes, as well as in the atmospheres of Jupiter and other Solar System objects. Researchers also build masers in the lab to serve as extremely reliable clocks for many experiments.

Center for Astrophysics | Harvard & Smithsonian scientists and engineers are involved in both artificial and natural maser research: 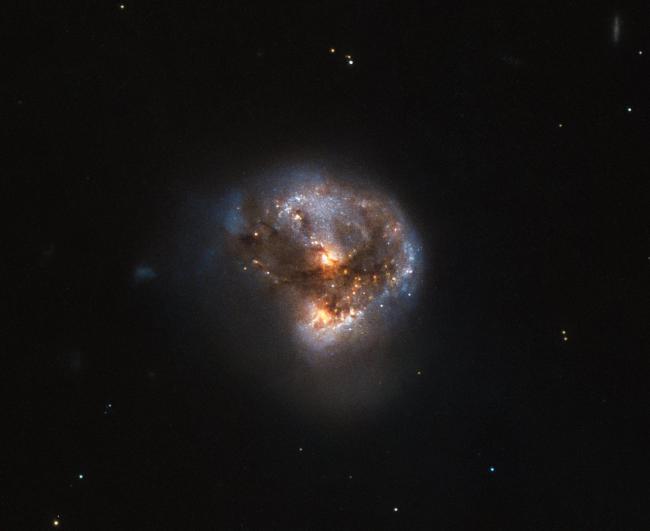 This galaxy's serene appearance hides the fact that it is actually two galaxies merging. This collision has given birth to a "megamaser" called IRAS 16399-0937, where rapid star-formation produces intense microwave radiation.

Lighting Up in Sync

Each type of atom or molecule absorbs and emits light of specific wavelengths, giving them a unique spectrum. In some cases, shining light on atoms or molecules can stimulate the emission of photons of the same wavelength — color — as the original light. This creates a cascade effect, resulting in a lot of light of a very pure color, often beamed in one direction. That’s the principle behind lasers, familiar from many everyday items.

That’s the principle behind both lasers and masers. In fact, the words were originally acronyms for “Light” or “Microwave Amplification by the Stimulated Emission of Radiation”, though that use isn’t common anymore. Masers are the lower-energy form, and occur naturally throughout the universe.

The most powerful masers, known as megamasers, are found near supermassive black holes at the centers of galaxies. Molecules of water embedded in matter falling onto the black hole are powerful masers, emitting in radio wavelengths. That provides details about the black hole’s environment, as well as a way to measure its distance. Other masers occur around forming and dying stars, in the remnants of supernovas, and in the atmospheres of Solar System worlds.

The unique colors and brightness of masers also allow scientists to identify the chemical composition of interstellar clouds. The first astronomical maser discovered was used as evidence for the existence of molecules in space, which some researchers at the time didn’t think could exist. Since then, astronomers have found masers from water, hydroxyl, hydrogen, ammonia, methanol, silicon monoxide, and many other molecules.

Artificial masers work the same basic way as the naturally-occurring versions, only with dedicated power supplies and amplification chambers to contain the gas. Astronomers use the very precise frequency at which molecules in masers absorb and emit light as a clock. Hydrogen masers are used to coordinate telescopes separated by thousands of miles, the observation method known as Very Long Baseline Interferometry (VLBI).

Masers can also be used in tracking spacecraft and for testing fundamental physics, as part of space-based experiments to test Einstein’s theory of relativity.

The Lifetimes of Massive Star-Forming Regions