What if we could build a telescope the size of Earth? That’s obviously not practical, but combining multiple telescopes into one giant observatory brings us as close as we can. Using a  technique known as very long baseline interferometry (VLBI), researchers link observations from radio telescopes separated by whole continents into one virtual observatory. VLBI allows high-resolution radio light observations of the centers of galaxies and other regions of space difficult to observe with single telescopes.

Center for Astrophysics | Harvard & Smithsonian astronomers develop and contribute to VLBI observations, including:

From Many Telescopes, One Observatory

Resolution depends primarily on two things: the size of the telescope and the wavelength of the light the telescope is designed to see. Generally speaking, bigger telescopes can achieve higher resolution, but there’s a practical limit to how large we can make them.

That’s where interferometry comes in. When acting together as an interferometer, two or more telescopes observing the same object at the same time have the same resolution as one telescope as big as the separation between the real instruments. Comparing the differences in the distances the light travels to get to each telescope produces an interference pattern, enabling very precise astronomical observations.

With VLBI virtual observatories that span the globe, astronomers can achieve extremely high resolution, allowing observation of hard-to-study places such as the centers of galaxies where supermassive black holes live. The most ambitious VLBI project to date is the Event Horizon Telescope (EHT), a coalition of observatories ranging from Greenland to the South Pole, which captured the first image of a black hole in the nearby galaxy M87. 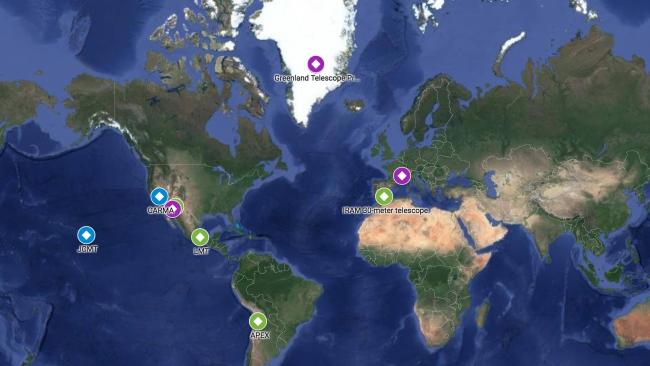 A map of observatories making up the Event Horizon Telescope (EHT), which provided the first image of a black hole ever taken. The green icons mark the sites used in that observation, while purple icons represent additional observatories being added to the array, and blue icons mark telescopes no longer part of EHT.