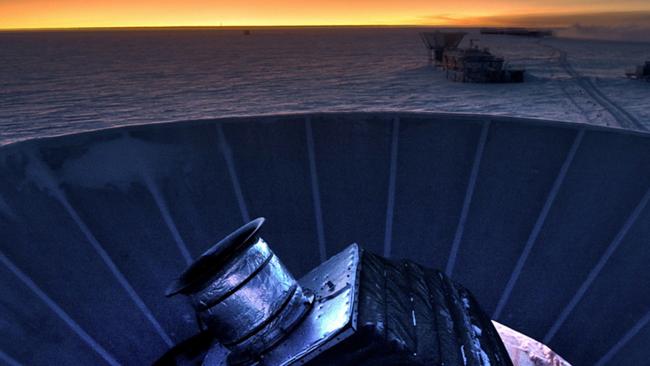 The BICEP3 telescope is located at the Amundsen-Scott South Pole Station in Antarctica. The metal skirt around the telescope shields it from reflected light from the surrounding ice.

The universe today looks pretty much the same on average no matter which direction we look. That sameness is even more dramatic when looking at the CMB: any two points in the CMB have the same temperature to within ten millionths of a degree. To explain that uniformity and a few other mysteries in cosmology, some physicists developed a hypothesis called “inflation”. According to this hypothesis, this inflation in the tiny fraction of a second after the Big Bang caused the universe to expand at an extremely fast rate, smoothing out the early irregularities to make the CMB we observe today.

Inflation isn’t directly observable by any method we currently have, but the rapid expansion would have produced gravitational waves that permeated the whole universe. These primordial waves have wavelengths too big for existing observatories like LIGO to detect, but they produced a twisting in the light of the CMB known as B-mode polarization. The various instruments of the BICEP project are designed to measure that polarization.

The CMB is mixed with polarized light from astronomical objects closer to home: the gravitational pull of galaxy clusters and dust inside the Milky Way. For that reason, the BICEP telescopes are extremely sensitive, to enable separation of the different components of polarization of light from different sources. The project name was originally an acronym (standing for Background Imaging of Cosmic Extragalactic Polarization), but today only the name BICEP is used.

CfA researchers, particularly the CMB Lab at Harvard, led the effort to design BICEP’s instruments and analyze the data coming from observations. All BICEP Project telescopes are located on top of the Dark Sector Laboratory building just a short distance from the South Pole, as part of the Amundsen-Scott South Pole Station. This location provides dark skies for half the year, as well as extremely dry and relatively cloudless air.

The BICEP Program has operated since 2006, and consists of several stages of operation:

All data and published papers from the BICEP collaboration are freely available through the project website.