For the first 380,000 years or so after the Big Bang, the entire universe was a hot soup of particles and photons, too dense for light to travel very far. However, as the cosmos expanded, it cooled and became transparent. Light from that transition could now travel freely, and we see a lot of it today. This light is called the cosmic microwave background (CMB), and it carries information about the very early universe. Astronomers use the patterns in CMB light to determine the total contents of the universe, understand the origins of galaxies, and look for signs of the very first moments after the Big Bang.

No stable atoms existed in the early universe, because collisions between particles of light called photons and matter kept knocking electrons away. Those collisions also meant the cosmos was opaque, because photons couldn’t travel far.

But about 380,000 years after the Big Bang, the expansion of the universe allowed the first stable atoms to form. That event is called “recombination”, and it made the cosmos transparent. The joining of electrons to nuclei produced a lot of light, which could now travel through the less soupy universe and even reach us, 13.8 billion years later. Light from recombination was very energetic, but it cooled off with the rest of the universe, until it reached the microwave portion of the spectrum. This light corresponds to a temperature today of 2.7 Kelvin: 2.7º C above absolute zero, or -455º F.

Today, we see this light as the cosmic microwave background. Because recombination happened everywhere in the universe, we see CMB light coming from all directions. The CMB provides the best data we have on the early universe, and the structure of the cosmos on the largest scales. 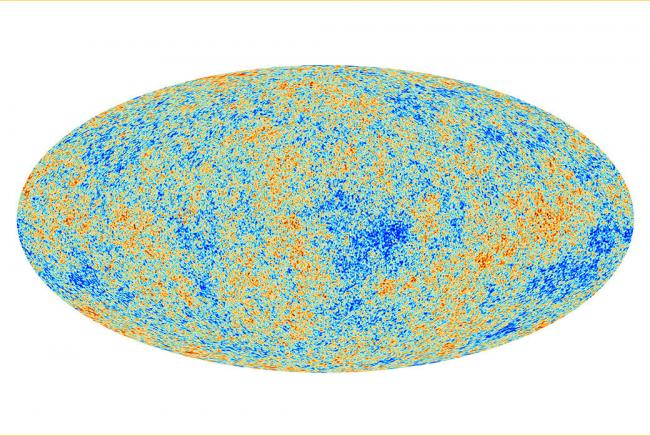 The cosmic microwave background is a snapshot of the oldest light in our universe, from when the cosmos was just 380,000 years old. The colors of the map represent small temperature fluctuations that ultimately resulted in the galaxies we see today.

Credit: ESA and the Planck Collaboration

The Baby Picture of the Universe

The CMB looks almost exactly the same, no matter what part of the sky we look at. The term for that in cosmology is “isotropic”, and the small deviations from perfect sameness are called anisotropies. Measuring the larger-sized anisotropies reveals how much dark energy, dark matter, and ordinary matter are contained in the universe.

The smaller anisotropies reveal the tiny fluctuations in density that gave rise to the pattern of galaxies and galaxy clusters we see today, which astronomers call the large-scale structure of the universe. Without those small irregularities, there wouldn’t be any galaxies, and we wouldn’t be here to observe them. Likewise, larger anisotropies wouldn’t produce the universe we see.

The overwhelming sameness of the CMB also tells us something about the early universe. Two points on the CMB on opposite sides of the sky shouldn’t have almost exactly the same temperature, since they weren’t close together at recombination. The most popular explanation for this is “inflation”: a tiny fraction of a second after the Big Bang, quantum fluctuations caused the universe to expand at an extreme rate. Points that were far apart at recombination today were neighbors before inflation, so they have nearly the same temperature.

According to theory, inflation left its mark on the CMB in the form of the twisting of light known as polarization. Astronomers use modern telescopes to look for that polarization, in hopes of seeing the behavior of the universe when it was only a fraction of a second old.

The Center for Astrophysics | Harvard & Smithsonian is home to the Kovac Lab, which has developed the BICEP program in collaboration with NASA’s Jet Propulsion Laboratory and other institutions. The various BICEP telescopes measure CMB polarization to a high degree of precision, with the goal of identifying the physical processes at work in the first instants of the cosmos. The current iteration of the project includes the BICEP3 telescope and the Keck Array, both located at the South Pole.

Fast Radio Bursts May Be Firing Off Every Second

Scientists Are Using the Universe as a "Cosmological Collider"

The Evolution of Massive Galaxy Clusters