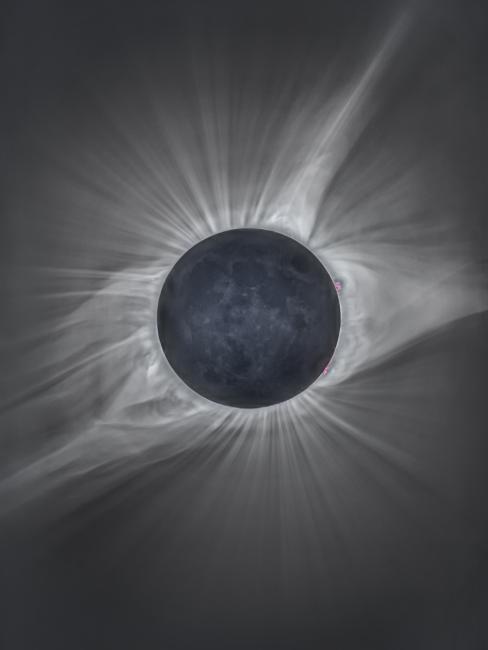 Photo of the total solar eclipse that occurred on August 20, 2017.

The corona is the extremely hot outermost layer of the Sun’s atmosphere, and the source of the violent solar storms that can damage satellites and disrupt electrical systems on Earth. The Sun’s magnetic field is responsible for these storms in some way, but the details are still mysterious, in part because the coronal magnetic field is extremely difficult to study. However, understanding these fields better would aid in predicting and mitigating the effects of these coronal mass ejections (CMEs).

AIR-Spec is a spectrometer designed to map the effects of the magnetic field of the corona by measuring the infrared light emissions of five ions — atoms where one or more electrons have been stripped away — found in the Sun’s corona. These ions are sulfur with ten missing electrons (S XI), iron with eight missing electrons (Fe IX), magnesium with seven electrons absent (Mg VIII), and silicon missing either eight (Si IX) or nine electrons (Si X). AIR-Spec performs these measurements during a total solar eclipse, when the Moon blocks light from the Sun’s surface, leaving only light emitted by the atmosphere to reach Earth.

AIR-Spec was developed at the CfA, with significant input from students. The instrument’s first observation was during the total eclipse on August 21, 2017 over Kentucky. AIR-Spec flew on a Gulfstream V airplane operated by the National Science Foundation and the National Center for Atmospheric Research, at an altitude of 14 kilometers. During the four minutes of totality, AIR-Spec performed as expected, including a measurement of emissions from an ion that had never been observed previously. Based on lessons learned during this successful experiment, scientists at the CfA are improving AIR-Spec for the July 2, 2019 eclipse, when it will observe the corona during a flight off the coast of Chile.