Astronomical images carry a lot of scientific information hidden within the beautiful colors, but even that’s only part of the story. A great deal of knowledge comes from analyzing the light as broken down into its spectrum. The specific colors and relative amounts of each color reveal information about temperature, what atoms are present, and the speed of the astronomical object being observed, which reveals the distances to far-off galaxies. For those reasons, spectroscopy is one of the essential tools of astronomy.

Center for Astrophysics | Harvard & Smithsonian scientists apply spectroscopy to every aspect of astronomy: 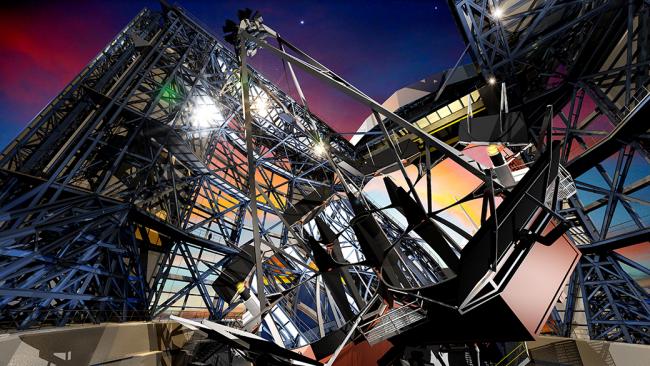 The Giant Magellan Telescope (GMT) will carry the G-CLEF spectrometer to study the atmospheres of exoplanets and perform other spectroscopic measurements. This computer-generated image shows the GMT at sunset, preparing for observations.

As Isaac Newton demonstrated in 1704, white light is a mixture of all the colors of the rainbow, which can be separated using a prism or — in the case of a real rainbow — a drop of water. In the 19th century, scientists realized they could identify different types of atom by the light they emitted. A group of astronomers even discovered the element helium by looking at the spectrum from the Sun, naming it for “Helios”, the Greek sun god.

Spectroscopy rapidly became a powerful tool in both chemistry and astronomy. The quantum theory of atoms provided an explanation for the unique spectrum of each element and molecule. Thanks to the particular interactions between the electrons and nuclei, each type of atom or molecule can only absorb or emit light of specific wavelengths, which are the physical property of light that gives its color. For instance, colors of neon, krypton, or sodium light bulbs are colored red, blue, and yellow because atoms of those elements emit most of their light in those wavelengths.

Today, astronomers use that quantum knowledge to build spectrographs, which split light into its component colors in a more precise way than Newton’s glass prism. By seeing which colors are emitted or absorbed, and the relative amounts of each wavelength, astronomers can identify the chemical composition of a star’s atmosphere or an interstellar nebula, along with the temperature and pressure of the gas.

Astronomers also use known spectra to measure the distance to galaxies. The universe is expanding, carrying galaxies along with it, so distant galaxies appear to be moving away from us. The light emitted by those galaxies is “redshifted”, meaning it’s stretched to longer wavelengths. The larger the redshift, the faster the galaxy seems to be moving, and the farther away it is. By identifying how much the spectrum of hydrogen from distant galaxies is redshifted, astronomers can measure the distance to those galaxies.

On a smaller scale, astronomers use spectroscopy to measure the the motion of a star in a binary star system, from an orbiting exoplanet, due to the tug of a black hole, or any number of other possibilities. The motion of the star toward us blueshifts the light slightly, moving it to shorter wavelengths, while moving away redshifts the light. This is the Doppler effect for light, the same essential phenomena produced when an ambulance siren changes pitch as it passes.

Researchers also do spectroscopy in the lab, studying the spectrum of different elements and molecules under a variety of conditions.

For example, experiments have determined that the relative strength of two emission lines in a spectrum provides an independent test of the temperature and density of the atoms making that spectrum. That in turn is useful for astronomical observations.

Astrochemists have also produced and studied complex organic molecules in the lab under simulated interstellar conditions. These molecules were later observed in space, confirming the experiments’ findings.

Laboratory research in astrochemistry studies how ionization changes the spectrum of atoms and molecules. Ionization in astronomy means stripping electrons away, turning the material into a plasma. This happens in many astronomical environments, including the atmospheres of stars, interstellar space, the region between galaxies in a galaxy cluster, and many other places. Using laboratory experiments and theoretical calculations, researchers develop methods of studying astronomical plasmas and the processes that made them.