SPT is a 10-meter telescope designed to measure tiny CMB temperature ripples in submillimeter or microwave light, between infrared and radio on the spectrum of light. Its capabilities also make it an important node in the EHT, which collects submillimeter light emitted by matter just before it falls into a supermassive black hole.

SPT began operations in 2007. As of 2017, the observatory is equipped with SPT-3G, the “third generation” detector designed to provide the best data on the twisting of light known as polarization. CMB polarization comes from density fluctuations in the early universe, as well as dust particles in the Milky Way that twist the light as it passes through.

However, many cosmologists think the universe expanded extremely rapidly during the split-second after the Big Bang in a event called “inflation”. This expansion would have produced gravitational waves, which also would polarize the CMB. The SPT-3G instrument is designed in part to look for that polarization signal, which would be the first hard evidence for cosmic inflation. SPT’s abilities overlap with those of the dedicated BICEP polarization experiment, so it provides a valuable check on BICEP results.

The SPT is located at the Amundsen–Scott South Pole Station in Antarctica, at an elevation of 2,800 meters (9,300 feet). This high and dry location far from cities provides a clear sky, in addition to the months-long Antarctic winter night. The telescope was built with a metal skirt wall around it to limit reflection from the surrounding ice. The SPT measures the CMB using “bolometers”: devices operating at low temperatures at the transition between superconducting behavior and normal material behavior. When a CMB photon enters the bolometer, it triggers the transition, providing an extremely sensitive measurement. 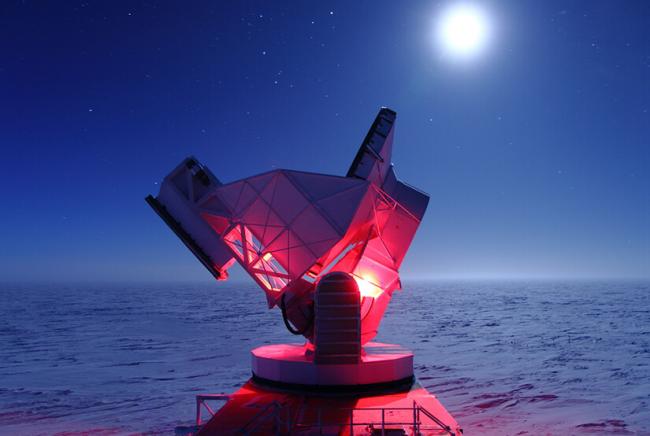 The South Pole Telescope (SPT) is a 10-meter-diameter telescope located at the Amundsen-Scott South Pole Station, Antarctica. In addition to its primary mission of measuring the cosmic microwave background, the SPT is part of the Event Horizon Telescope project.