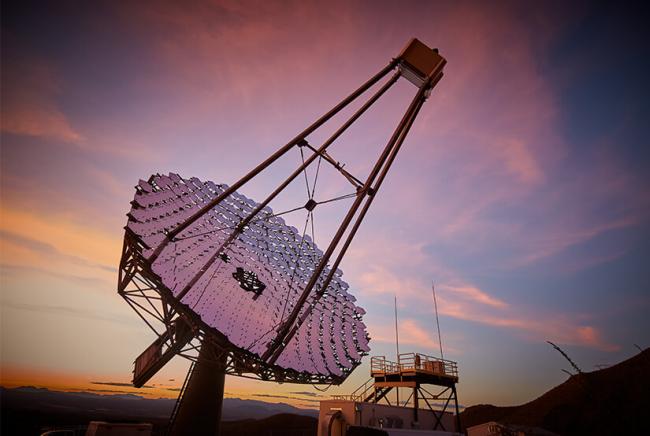 One of the four 12-meter telescopes comprising the VERITAS gamma-ray observatory. VERITAS is located at the Fred Lawrence Whipple Observatory in southern Arizona.

Gamma rays are the highest energy form of light, produced by interactions between particles in extreme environments: matter swirling around the supermassive black holes known as blazars, supernova remnants, material battered by neutron stars, and many more. Gamma ray researchers look at galaxies for the sources of cosmic ray particles and signs of dark matter collisions.

Earth’s atmosphere blocks most of these photons, which means many gamma ray experiments are space-based, such as NASA’s Fermi Gamma Ray Observatory. However, the most energetic gamma rays come from sources that are too faint for the relatively small detectors in space telescopes.

VERITAS and similar ground-based gamma ray observatories take another route. When the highest-energy photons enter the atmosphere, they produce a burst of particles known as an “air shower”. Those particles in turn produce a burst of blue light known as Cherenkov radiation. Gamma ray observatories like VERITAS effectively use the whole atmosphere as their detector, and track the blue visible light produced from the air shower using optical telescopes. The shower of Cherenkov photons covers an area roughly 260 meters (850 feet) in diameter.

The VERITAS observatory consists of four 12-meter (39-foot) optical telescopes located on Mt. Hopkins in Arizona. This location provides clear, dark skies through much of the year. The first VERITAS telescope began operation in 2004, with the full four-instrument array beginning observations in 2007. The telescopes measure the Cherenkov light using photomultiplier tubes, which make a detectable electrical signal out of a small number of photons that are too faint for ordinary telescope cameras.

The telescopes are about 100 meters (328 feet) apart in a rectangular arrangement, allowing the instruments to reconstruct the shape and direction of the shower of photons. That in turn reveals the energy and origin of the primary gamma ray photons.