When stars die, their fate is determined by how massive they were in life. Stars like our Sun leave behind white dwarfs: Earth-size remnants of the original star’s core. More massive stars explode as supernovas, while their cores collapse into neutron stars: ultra-dense, fast-spinning spheres made of the same ingredients as the nucleus of an atom. At least some neutron stars are pulsars, which produce powerful beams of light, which as they sweep across our view from Earth look like extremely regular flashes.

Small as they are, the deaths of these compact objects change the chemistry of the universe. The supernova explosions of white dwarfs and the collisions of neutron stars create new elements on the periodic table. For all these reasons, white dwarfs and neutron stars are important laboratories for physics at the extremes of strong gravity, density, and temperature.

Our Sun is a middle-aged star. It’s been around for roughly 5 billion years, and has about 5 billion more years to go before it dies. The lifespan of the Sun, like any other star, is determined by its mass, which in turn dictates how quickly it burns through its nuclear fuel. Once that fuel is exhausted, the Sun and other stars in the same mass range will shed their outermost layers, exposing the core. The remnant of that core, which are made mostly of carbon and oxygen, is a white dwarf roughly the diameter of Earth, but far more massive. Some white dwarfs are also created in binary systems, where the gravity from a companion object strips the outer layers of the star off, exposing the core. These white dwarfs are made of helium.

Despite their name, white dwarfs can range in color from blue-white to yellow, depending on how hot they are. They are common: most stars will eventually become white dwarfs. However, their small size makes them difficult to see directly unless they’re relatively close the Solar System. In many cases, though, they are in binary systems with ordinary stars, in which case astronomers can detect their presence by the gravitational effect they have on their companion.

Sometimes those white dwarf binary systems can end catastrophically. White dwarfs have a maximum mass of about 1.4 times the Sun’s mass, known as the Chandrasekhar limit. Beyond that point, adding mass can cause it to explode in a white dwarf supernova, also known as a “type Ia” supernova.

Whether the cause of the explosion is a normal star or another white dwarf, type Ia supernovas explode in very similar ways, producing a predictable pattern of light emission. Astronomers use that pattern to determine the distance to far-off galaxies, and refer to type Ia supernovas as “standard candles”. 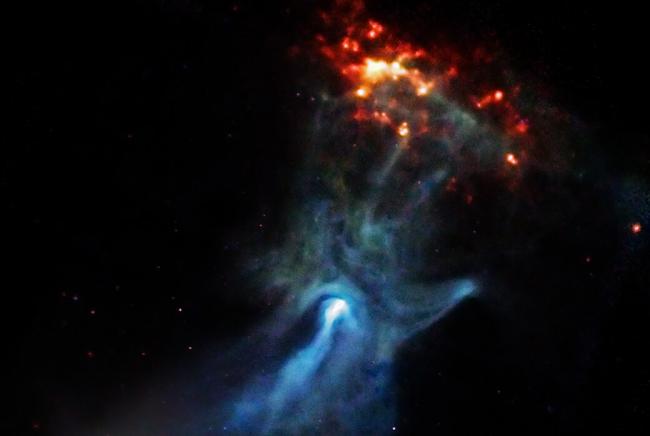 This X-ray image shows the cloud of gas surrounding a young pulsar known as PSR B1509-58. The pulsar itself is only about 20 kilometers across, but its powerful emissions shape the environment around it.

The Life and Death of a Neutron Star

If a star is more than eight times the mass of the Sun, it burns through its nuclear fuel at a faster rate. However, the core shrinks and grows hotter as it consumes the fuel, letting it fuse heavier elements up to iron. Finally, when it can’t burn any more, the core collapses, and the star explodes in a supernova. If the star is heavier than about 20 times the Sun’s mass, the core becomes a black hole. In the range between 8 and 20 times the Sun’s mass, the remaining collapsed core gives birth to a neutron star.

These objects are more massive than the Sun, but only about 20 kilometers in diameter. The exterior is a crust made primarily of iron atoms. Beneath the surface, no atoms exist. Instead, electrons are smashed into protons to make neutrons. Deeper still, the neutron star consists of a fluid of protons and electrons, which flow without friction and produce powerful magnetic fields. The combination of intense gravity, high temperature, and extreme density makes neutron stars like nothing we can produce on Earth.

The magnetic fields channel matter surrounding the neutron star into light-emitting jets, much like those we see near some black holes. Neutron stars spin very rapidly, so if the jets pass across the field of view of our telescopes, we call them “pulsars” due to the flashes of light we observe. Most known neutron stars are pulsars.

Pulsars spin anywhere between once every few seconds to hundreds or — in the case of millisecond pulsars — thousands of times per second, depending on their environment and how they formed. Some millisecond pulsars spin so precisely they can be used as interstellar clocks. Astronomers study the different types of pulsars to understand why they spin at the rates they do, and how they change those rates during the neutron starquakes called “glitches”.

Like white dwarfs, some neutron stars are in binaries with other neutron stars, or partnered with ordinary stars. Colliding neutron star binaries are a significant source of gravitational waves, and produce explosions known as “kilonovas” or short-duration gamma-ray bursts. These events are powerful enough to start nuclear fusion reactions, producing elements like gold. Meanwhile, neutron stars that strip matter off companion stars produce bright X-ray and radio emissions.