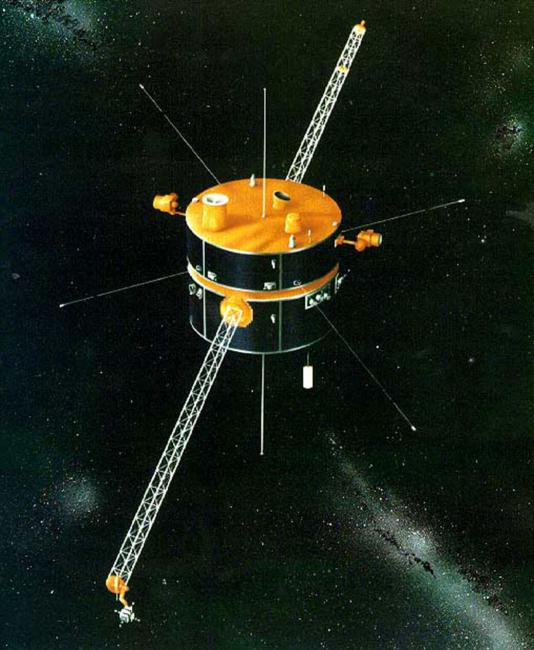 An artist's impression of the Wind Spacecraft, which has orbited the Sun since its launch in 1994. Wind should continue to monitor the particles known as the solar wind for many years to come.

The solar wind is a stream of electrically charged particles flowing out from the Sun. This wind fluctuates with conditions on the Sun, and can have a profound effect on planets, asteroids, and other Solar System bodies. In particular, the powerful particle discharges known as coronal mass ejections have disrupted power grids and communications on Earth.

NASA’s Wind Spacecraft was designed to study the properties of the solar wind, and how it interacts with Earth’s magnetic field. For the first decade of its mission, the spacecraft orbited Earth, but since 2004, Wind has orbited the Sun at a special position known as the first Lagrange point (L1), where the combined gravity of Earth and the Sun balance out. This position is about 1.5 million kilometers (a little less than 1 million miles) from Earth, or roughly one percent of the distance between Earth and the Sun, which gives Wind the ability to measure the solar wind’s properties about an hour before it reaches Earth. NASA’s Solar and Heliospheric Observer (SOHO) and DSCOVR spacecraft are also located at L1.

Wind carries a suite of instruments to determine the types and velocities of solar wind particles, as well as measure the magnetic field strength within the wind. Wind’s Solar Wind Experiment (SWE) is operated by researchers at the CfA. This part is a device used to collect ions: the positively-charged nuclei produced when electrons are stripped from atoms. In the solar wind, these are mostly protons, but also include helium nuclei and a few heavier ions. CfA collaborated on a similar instrument used aboard the Parker Solar Probe. The other part of SWE collects and measures the properties of solar wind electrons.

Other detectors on Wind include: the Magnetic Field Investigation (MFI), which measures the strength and direction of the magnetic field within the wind in three dimensions; the 3D Plasma Analyzer (3DP), which maps the flow of the solar wind using its electrical properties; the Energetic Particles: Acceleration, Composition and Transport (EPACT) suite of instruments to study the highest-energy wind particles; and the WAVES experiment to study fluctuations within the flow of particles. The probe also carries a gamma-ray instrument that fulfilled its planned mission and no longer operates.

Thanks to these detectors and Wind’s stable orbit at L1, the spacecraft continues to provide essential data on the solar wind, and will keep doing so for the next few decades.