Astronomers Find a New Type of Planet: The "Mega-Earth" 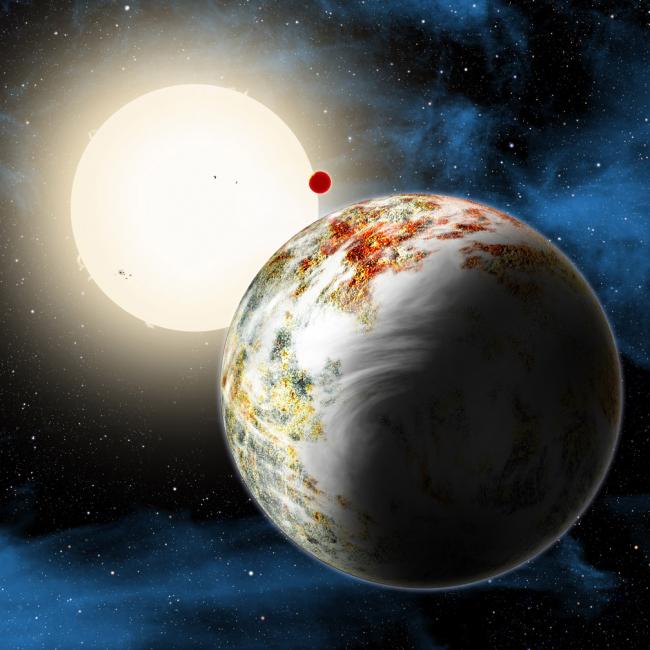 Astronomers announced today that they have discovered a new type of planet - a rocky world weighing 17 times as much as Earth. Theorists believed such a world couldn't form because anything so hefty would grab hydrogen gas as it grew and become a Jupiter-like gas giant. This planet, though, is all solids and much bigger than previously discovered "super-Earths," making it a "mega-Earth."

"We were very surprised when we realized what we had found," says astronomer Xavier Dumusque of the Harvard-Smithsonian Center for Astrophysics (CfA), who led the data analysis and made the discovery.

"This is the Godzilla of Earths!" adds CfA researcher Dimitar Sasselov, director of the Harvard Origins of Life Initiative. "But unlike the movie monster, Kepler-10c has positive implications for life."

The team's finding was presented today in a press conference at a meeting of the American Astronomical Society (AAS).

The newfound mega-Earth, Kepler-10c, circles a sunlike star once every 45 days. It is located about 560 light-years from Earth in the constellation Draco. The system also hosts a 3-Earth-mass "lava world," Kepler-10b, in a remarkably fast, 20-hour orbit.

Kepler-10c was originally spotted by NASA's Kepler spacecraft. Kepler finds planets using the transit method, looking for a star that dims when a planet passes in front of it. By measuring the amount of dimming, astronomers can calculate the planet's physical size or diameter. However, Kepler can't tell whether a planet is rocky or gassy.

Kepler-10c was known to have a diameter of about 18,000 miles, 2.3 times as large as Earth. This suggested it fell into a category of planets known as mini-Neptunes, which have thick, gaseous envelopes.

The team used the HARPS-North instrument on the Telescopio Nazionale Galileo (TNG) in the Canary Islands to measure the mass of Kepler-10c. They found that it weighed 17 times as much as Earth - far more than expected. This showed that Kepler-10c must have a dense composition of rocks and other solids.

"Kepler-10c didn't lose its atmosphere over time. It's massive enough to have held onto one if it ever had it," explains Dumusque. "It must have formed the way we see it now."

Planet formation theories have a difficult time explaining how such a large, rocky world could develop. However, a new observational study suggests that it is not alone.

Also presenting at AAS, CfA astronomer Lars A. Buchhave found a correlation between the period of a planet (how long it takes to orbit its star) and the size at which a planet transitions from rocky to gaseous. This suggests that more mega-Earths will be found as planet hunters extend their data to longer-period orbits.

The discovery that Kepler-10c is a mega-Earth also has profound implications for the history of the universe and the possibility of life. The Kepler-10 system is about 11 billion years old, which means it formed less than 3 billion years after the Big Bang.

The early universe contained only hydrogen and helium. Heavier elements needed to make rocky planets, like silicon and iron, had to be created in the first generations of stars. When those stars exploded, they scattered these crucial ingredients through space, which then could be incorporated into later generations of stars and planets.

This process should have taken billions of years. However, Kepler-10c shows that the universe was able to form such huge rocks even during the time when heavy elements were scarce.

"Finding Kepler-10c tells us that rocky planets could form much earlier than we thought. And if you can make rocks, you can make life," says Sasselov.

This research implies that astronomers shouldn't rule out old stars when they search for Earth-like planets. And if old stars can host rocky Earths too, then we have a better chance of locating potentially habitable worlds in our cosmic neighborhood.

The HARPS-N project is led by the Astronomical Observatory of the Geneva University (Switzerland). The National Institute for Astrophysics (INAF, Italy) has agreed to provide 80 observing nights per year over five years to use HARPS-N coupled to the TNG. The U.S. partners are the Harvard-Smithsonian Center for Astrophysics and the Harvard University Origins of Life Initiative; and the UK partners are the Universities of St. Andrews and Edinburgh, and the Queens University of Belfast.