Does life exist outside of the solar system?

Since humans first looked to the cosmos, we have wondered if life exists elsewhere in the Universe. Scientists and engineers at the Center for Astrophysics | Harvard & Smithsonian may soon be able to answer that question.

1.3%
Approximate percentage of known exoplanets that might have liquid water on their surface

Scientists and engineers from the Center for Astrophysics aim to achieve the following advances to enable the discovery of life on other planets:

Exoplanets, or planets in solar systems other than our own, sometimes orbit directly between the Earth and their host star. When the planet orbits in front of its star, it blocks a small amount of light. CfA scientists use the Transiting Exoplanet Survey Satellite (TESS) and the Kepler space telescopes as well as the ground-based robotic telescopes of the MEarth project to look for dips in starlight. This “transit” method of planet hunting has revealed thousands of exoplanets.

Thanks to next generation telescopes like the planned Giant Magellan Telescope (GMT), we are approaching a point in our observational capabilities that may allow us to make previously unthinkable discoveries. One of these breakthroughs is the detection of life on a distant planet, light years away from Earth. 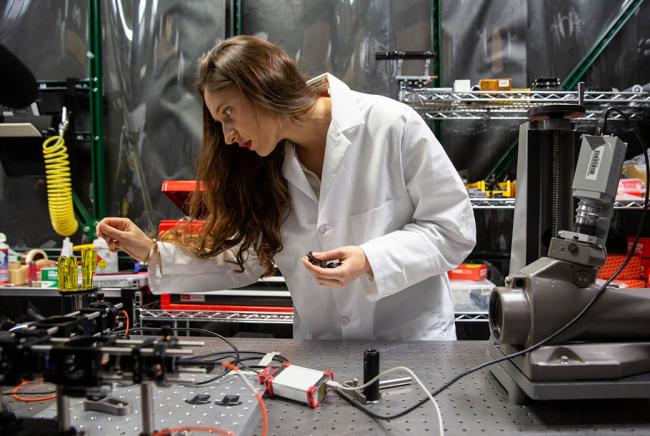 Juliana Garcia-Mejia working on the GMT-Consortium Large Earth Finder (G-CLEF) spectrograph for the Giant Magellan Telescope, in a lab at CfA in Cambridge, MA.

Institute for Theory and Computation scientists at the CfA work on identifying the exoplanets that are most likely to harbor life. The orbit must lie in the “habitable zone” where the exoplanet’s surface is just the right temperature for liquid water to exist. Every form of life we know requires liquid water, so an exoplanet too close or too far from its host star is less likely to contain life. Additionally, ultraviolet light may be needed to form some necessary prebiotic molecules, but an overactive host star can blast the young planet, stripping away its atmosphere. When searching for extraterrestrial life, finding the perfect star could be as important as finding the perfect exoplanet.

The G-CLEF or GMT-Consortium Large Earth Finder, a next-generation spectrometer planned for use on the GMT, is our newest tool for measuring the starlight filtered through the atmosphere of an orbiting exoplanet. Using this instrument, scientists will soon be able to measure the chemical composition of a small rocky exoplanet’s atmosphere. Such an extraordinary feat is like trying to see through and study the antennae of a moth flying in front of a spotlight.

Based on our current understanding of the conditions necessary for life, the detection of biomarkers like oxygen in the atmosphere of a remote world through such observations would hint towards the presence of living organisms.

When we look at our own planet Earth, we see life that abounds everywhere. Do these same conditions exist elsewhere in the Universe? Remarkably, 21st Century science and engineering may soon answer that question.
Dr. Charles Alcock, Director, The Center for Astrophysics

The Two Micron All-Sky Survey (2MASS) was an ambitious project to map the entire sky in infrared light, providing a cosmic census of galaxies, star clusters, small Solar System bodies, and many more. 2MASS used two telescopes: the 1.3 Meter Telescope operated by the Center for Astrophysics | Harvard & Smithsonian, located at the Fred Lawrence Whipple Observatory (FLWO) in southern Arizona; and an identical instrument operated by the Cerro Tololo Inter-American Observatory in Chile. The survey was concluded in the late 1990s, making the telescope available to CfA astronomers and collaborators for new projects. The telescope was converted to automatic control, and renamed Peters Automated Infrared Imaging Telescope (PAIRITEL), for a program monitoring transient events such as supernovas and gamma-ray bursts. The PAIRITEL project ran from 2003 to 2012. Plans are underway in 2019 to reconfigure the telescope for visible-light measurements to hunt for exoplanets.