The Atmospheres of Water Worlds 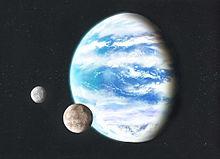 Artist's illustration of a hypothetical ocean planet with two natural satellites. Astronomers have calculated the rates of evaporation of water from ocean planets under a variety of stellar wind scenarios, and conclude that ocean exoplanets around M stars are likely to loose their water in a relatively brief time.

There are currently about fifty known exoplanets with diameters that range from Mars-sized to several times the Earth's and that also reside within their stars' habitable zone – the orbital range within which their surface temperatures permit water to remain liquid. A "water world" is an extreme case, an exoplanet defined as being covered by a deep ocean, perhaps as deep as hundreds of kilometers, and among these fifty are several that might be candidates for this category. Astronomers note that at least two of the terrestrial planets in our solar system, Earth and Venus, may possibly also have been water worlds early in their evolution.

One of the critical factors in determining if a planet could really be habitable is the presence of an enduring atmosphere. The deep oceans on a water world offer a reservoir for water vapor for its atmosphere, and so scientists have been trying to calculate how stable an exoplanet’s ocean and atmosphere are, especially to effects like evaporation by winds from the star. Since most of the fifty known examples orbit close to their small, host M stars, they are heavily exposed to stellar winds and related stellar space weather events even though their temperatures may be moderate.

CfA astronomer Manasvi Lingam was a member of a team of astronomers who modeled the effects of the stellar wind on a water world under a variety of possible scenarios. They include effects of stellar magnetic fields, coronal mass ejections, and atmospheric ionization and ejection. Their computer simulations are in good agreement with the current Earth-Sun system, but in some of the more extreme possibilities, as for example might exist on the set of exoplanets around M-stars, the situation is very different and the escape rates may be as much as or more than one thousand times greater. The result means that even a water world, if it orbits an M-dwarf star, could lose its atmosphere after about one billion years, a relatively brief time for possible development of life. Lingam has also recently co-authored two related articles on the same topic with CfA astronomer Avi Loeb (see below).