A collection of the 3D objects from NASA's Chandra X-ray Observatory is now available on a new platform from the Smithsonian Institution. 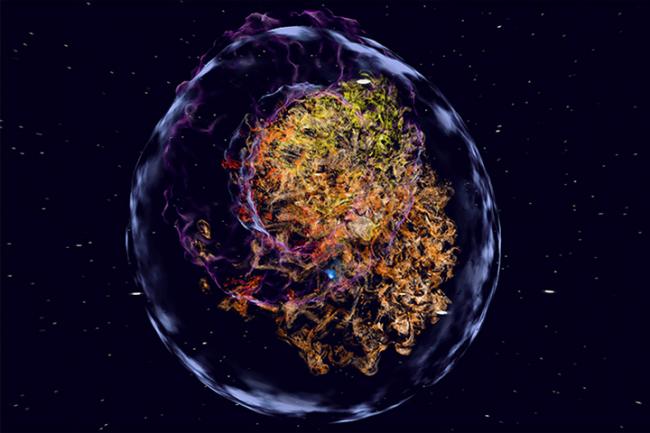 A stunning supernova remnant called IC 443 is part of Chandra's new collection of 3D visualizations located on the Voyager platform.

A collection of the 3D objects from NASA's Chandra X-ray Observatory is now available on a new platform from the Smithsonian Institution. This will allow greater access to these unique 3D models and prints for institutions like libraries and museums as well as the scientific community and individuals in the public.

Chandra's 3D datasets are now included in Voyager, a platform developed by the Smithsonian's Digitization Program Office, which enables datasets to be used as tools for learning and discovery. Viewers can explore these fascinating 3D representations of objects in space alongside a statue of George Washington or a skeleton of an extinct mammoth.

The only requirement to access these 3D models is a smartphone, tablet, or computer that has a current web browser. The Voyager platform enables 3D manipulation, augmented reality, or downloads of 3D printable files. There are also additional levels of information and interaction for the Chandra 3D models, including annotated tours pointing out key features on each cosmic object.

The current suite of Chandra 3D models in Voyager features stars in various phases of the stellar life cycle. Through a variety of techniques, astronomers have captured data from Chandra and other telescopes from these stars and constructed science-based simulations and 3D models of what previously had been represented as flat, two-dimensional projections on the sky.

The inclusion of the Chandra collection in Voyager coincides with the release of Chandra's latest 3D model: a stunning supernova remnant (remains of an exploded star) called IC 443 located about 5,000 light-years from Earth. Details of the model are included in a paper published in the journal Astronomy & Astrophysics led by Sabina Ustamujic from the National Institute for Astrophysics (INAF) in Palermo, Italy.

There are several versions of this 3D model of IC 443. In the first, Ustamujic and colleagues produced an interactive version of IC 443 that shows a shock wave (similar to a sonic boom produced by a supersonic plane) and a nearby cloud of gas (purple). The shock wave (gray) and the remains of the star (red, yellow, green, and blue) have collided with the gas cloud (gray) and are now passing through it. The different colors for the star’s remains show the range of velocities for their motion away from the center of the explosion. The model is combined with a visible light image of this field of view from the Focal Pointe Observatory, a private telescope run by amateur astronomer Bob Franke.

A comparison of the 3D model with X-ray data from ESA’s XMM-Newton shows that the collision of the shock wave and debris with the gas cloud is the main factor responsible for the unusually complex appearance of the X-ray emission from IC 443.

The 3D model also gives important information about the supernova explosion that formed IC 443. It shows that the explosion was weaker than most supernovae and that it occurred about 8,000 years ago, in Earth's time frame. In addition, this work provides new evidence that a source of X-rays discovered with Chandra (blue in the inset image) contains the neutron star that formed when a massive star collapsed and exploded to create IC 443.

A new adaptation of the 3D model, which has been optimized for virtual reality (VR), is featured in the main graphic. In this 3D version of IC 443, the outer blast wave of the explosion is bright blue, while the outer layers of the star are in reds and oranges. Chandra’s data of the nebula of particles and energy around the neutron star is found at the center of this VR version (cyan).

In a version for Voyager, the 3D model has been transformed so that it is more suitable for augmented reality as well as 3D printing, which requires connected structures. The Voyager IC 443 has the central region of the debris field in blue with the shockwave in purple. A full list of the Chandra 3D objects, along with information about how to view and print, is available at https://chandra.si.edu/3dprint/.