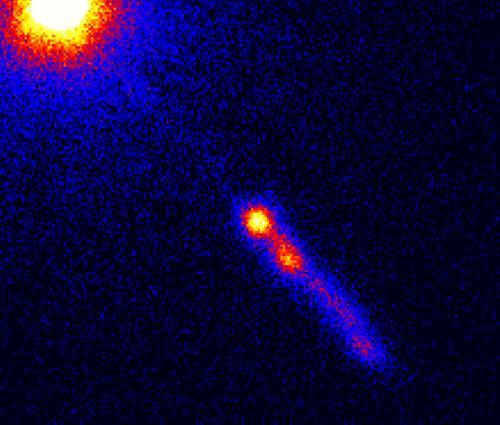 The quasar 3C 273 with its jet, as seen by the Chandra X-ray Observatory. Astronomers have found that the X-ray and ultraviolet luminosities of quasars are so tightly correlated, even for quasars at large cosmological distances, that quasars can be used as new "standard candles" to help determine cosmic distances and probe other fundamental cosmological parameters.

In 1929, Edwin Hubble published observations that galaxies' distances and velocities are correlated, with the distances determined using their Cepheid stars. Harvard astronomer Henrietta Swan Leavitt had discovered that a Cepheid star varies periodically with a period that is related to its intrinsic luminosity. She calibrated the effect, and when Hubble compared those calculated values with his observed luminosities he was able to determine their distances. But even today only Cepheid stars in relatively nearby galaxies can be studied in this way.In order to extend the distance scale back to earlier times in cosmic history, astronomers have used supernovae (SN) - the explosive deaths of massive stars – which can be seen to much greater distances. By comparing the observed brightness of a SN with its intrinsic brightness, based on its classification, astronomers are able to determine its distance; comparing that with the host galaxy's velocity (its redshift, measured spectroscopically) yields the "Hubble relation" relating the galaxy's velocity to its distance. The most reliable supernovae for this purpose, because of their cosmic uniformity, are so-called "Type Ia" supernovae, which are thought to be "standard candles," all having the same intrinsic brightness. However even SN become harder to study in this way as they lie farther away; to date the most distant Type Ia SN with a reliable velocity determination dates from an epoch about 3 billion years after the big bang.

CfA astronomers Susanna Bisogni, Francesca Civano, Martin Elvis and Pepi Fabbiano and their colleagues propose using quasars as a new standard candle. The most distant known quasars have been spotted from an era only about seven hundred million years after the big bang, dramatically extending the range of standard candle redshifts. Another advantage of quasars is that hundreds of thousands of them have been discovered in the past few years. Not least, the physical processes in quasars are different from those in SN, providing completely independent measures of cosmological parameters.

The new scheme proposed by the astronomers relies on their discovery that the X-ray and ultraviolet emission in quasars are tightly correlated. At the heart of a quasar is a supermassive black hole surrounded by a very hot disk of accreting material that emits in the ultraviolet. The disk in turn is surrounded by hot gas with electrons moving at speeds close to that of light, and when ultraviolet photons encounter these electrons their energy is boosted into the X-rays. The team, building on their previous methods, analyzed X-ray measurements of 2332 distant quasars in the new Chandra Source Catalog and compared them to ultraviolet results from the Sloan Digital Sky Survey. They found that the tight correlation already known to exist between the ultraviolet and X-ray luminosity of local quasars continues in distant quasars, back over 85% of the age of the Universe, becoming even tighter at earlier times. The implication is that these two quantities can determine the distance of each quasar, and those distances can then be used to test cosmological models. If the results are confirmed, they will provide astronomers with a dramatic new tool with which to measure the properties of the evolving universe.