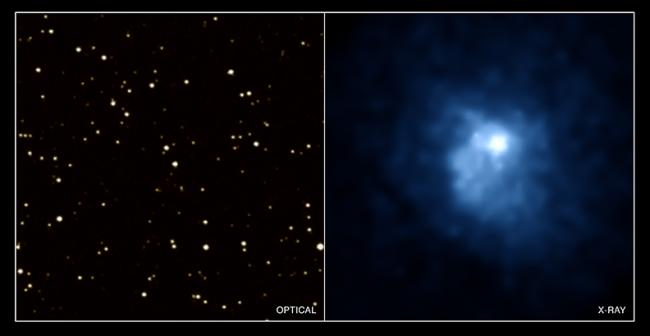 The galaxy 3C438 and its cluster of galaxies as seen in the optical (left) and in X-rays by the Chandra X-ray Observatory (right). Astronomers have concluded that the hot gas is the result of a collision between two clusters of galaxies.

Galaxy clusters contain a few to thousands of galaxies and are the largest bound structures in the Universe. Most galaxies are members of a cluster. Our Milky Way, for example, is a member of the "Local Group," a set of about fifty galaxies whose other large member is the Andromeda galaxy. The closest large cluster of galaxies to us, about fifty million light-years away, is the Virgo Cluster, with about 2000 members.

Clusters are believed to grow as the result of mergers between smaller galaxy groups and from the accretion of gas and dark matter. The energy released in these mergers is largely dissipated in the hot gas within the cluster, where X-ray observations can spot evidence for shocks and high temperatures. Mergers between two equally massive galaxy clusters provide particularly important diagnostics since these energetic collisions have the most dramatic and long-lasting effects. These major mergers are relatively rare events, however. The Bullet Cluster is one recently analyzed example, and because it also happens to act as a gravitational lens for background galaxies, it became famous for showing the distribution of its dark matter.

CfA astronomers Deanna Emery, Akos Bogdan, Ralph Kraft, Filipe Andrade-Santos, Bill Forman, and Christine Jones, and another colleague studied another major merger in the cluster around the galaxy 3C438. Members of the team used the Chandra X-ray Observatory to examine the hot cluster gas. Previous observations had concluded that activity was due either to a supermassive black hole or from a massive merger, but the two could not be distinguished. Using additional Chandra observations and new calibration procedures, the scientists re-reduced all the data. They found that the hot cluster gas extends over a distance of about 2.5 million light-years and has brightness features apparently caused by a merger bow shock. They are even able to calculate the estimated relative velocity of the merger as about 2600 kilometers per second. Since few observations of bow shocks in clusters have been made, this detection makes an important contribution to the study of the dynamics of cluster mergers and how massive clusters may have formed.