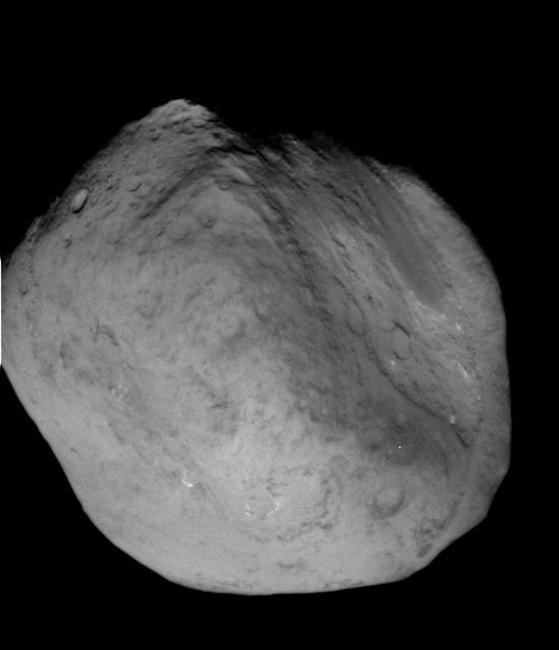 An image of the asteroid Tempel 1 taken during the Deep Impact visit. Tempel 1 is about five kilometers across. CfA astronomers report that there are about one hundred large NEOs that are dormant, short-period comets, and about .3 - 3% of the fainter ones are too.

Near Earth Objects (NEOs) are asteroids or comets whose orbits sometimes bring them close to the Earth, thereby posing a potentially threat. The asteroid that struck Chelyabinsk last year was an NEO about 40 meters in diameter. While it is relatively easy to detect an NEO in visible light by watching its movement across the sky from night to night, determining its size and its potential hazard is more difficult because its optical brightness results from both its size and its reflectivity. CfA astronomers have for several years been using the IRAC infrared camera on Spitzer to measure the infrared light emitted by NEOs and, combined with optical measurements, to deduce their probable dimensions.

NEOs are thought to originate from collisional fragments of objects in the asteroid belt beyond the orbit of Mars, with over 10,000 known today. Short–period comets can also be NEOs, but unlike asteroids they most likely originated in the Kuiper belt, a reservoir of icy bodies outside the orbit of Neptune. The orbits of these bodies are disturbed as a result of gravitational perturbations with the giant planets, and some end up as NEOs, developing cometary tails when they approach the Sun and become active. After a while, their volatiles evaporate and these comets become dormant. As a result, it is very likely that the NEO population being studied includes a significant number of extinct comets.

CfA astronomers Joe Hora, Giovanni Fazio and Howard Smith and their colleagues reported two years ago on the discovery that the NEO Don Quixote is actually an extinct comet - they were able to find its faint cometary tail in infrared images. Now they and their colleagues have completed a statistical analysis of the full near infrared catalog of NEOs, searching for possible short-period comets by using a combination of their orbital parameters and their surface albedos as inferred from their near infrared properties. The scientists found that between about 0.3 and 3% of the moderately bright NEOs are actually likely to be dormant, short-term period comets. They identify twenty-three specific ones as dormant comets. They also conclude that about one hundred large NEOs, with diameters larger than a kilometer. are probably also dormant short-period comets.