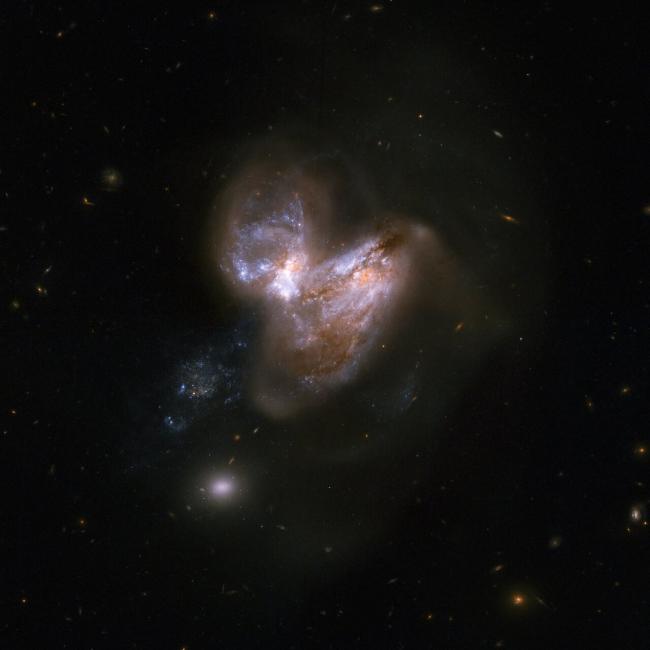 A Hubble image of the colliding galaxies NGC3690. Over its lifetime, a galaxy's star formation history is affected by many physical processes including mergers.  A new study uses many simulations of  galaxy evolution to develop a statistical method to categorize the star-formation history from snapshot observations.

Galaxies in the observable universe show a remarkable diversity in their structure and properties, mostly because of the many different pathways for their stars to form and evolve. The growth of galaxies typically occurs through the accretion of gas or by mergers of galaxies. Their star formation activity is affected by turbulence and feedback in the gas, and can be quenched by shocks or winds from supernovae or active galactic nuclei. The complex growth history of stars includes physical processes that operate over a wide range of timescales. At the shortest timescales, less than about tens of millions of years, dominant processes include ionizing radiation or molecular cloud collisions; for longer times, up to a few hundred million years, processes include starbursts, stellar feedback, magnetic field development, and galaxy-wide winds; and, at the longest times of tens of billions of years, key processes include galaxy mergers and the evolution of the abundances of the elements. An observation of a galaxy, therefore, is a snapshot of the cumulative effect of all these processes. Might it be possible to deduce the star formation history of a galaxy from an observation of this complex, overlapping mix of diverse phenomena?

CfA astronomers Sandro Tacchella, Lars Hernquist, and Benedikt Diemer and their colleagues have developed and successfully tested a method to address this complicated problem. Using a set of eight different computer simulations of galaxy evolution, the scientists looked at their star formation histories over one-hundred-million year (100 Myr) periods. They applied statistical methods to convert the development of star formation over galactic time into a measure of the star formation activity over time intervals. A galaxy, for example, that makes stars at a rate that steadily oscillates in 500Myr cycles over its lifetime would show, in a time interval analysis, a clear spike at 500Myr and nothing at other intervals.

The astronomers found that their analysis method, when applied to their multiple simulations, was successfully able both to describe the kind of star formation activity and to quantify the strength of its variations. They conclude that random activity shows a general, characteristic, statistical behavior that is about the same between galaxies even as the particular timescales vary, although it does vary in identifiable ways depending, for example, on stellar mass or other parameters. Significantly, the team was also able to discern differences between the statistical behaviors of the star formation rates in their different simulations. They conclude by noting that they can now apply this technique to observations of galaxies and, when compared with simulations, use the results to improve the understanding of the complex star formation history of galaxies.