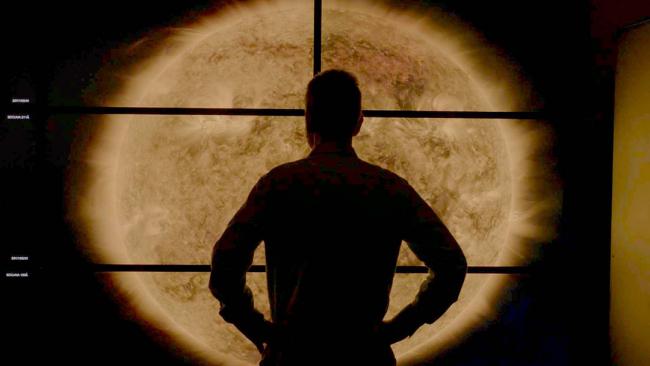 Dr. Jeremy Drake looks at images of the Sun at the Harvard-Smithsonian Center for Astrophysics in Cambridge, Mass.

A new program called "Finding Life in Outer Space" debuted on the Smithsonian Channel on March 25. The scientific lead for this program is Smithsonian Astrophysical Observatory's Jeremy Drake and also features interviews with Karin Öberg from the Harvard-Smithsonian Center for Astrophysics (CfA) as well as many collective scientific efforts based at the CfA.

"I wanted to look at a different slant to the story of the discovery of exoplanets," said Drake, "including more of the astrophysics that goes into it and the complex science rationale behind the possibility of life developing somewhere other than Earth."

"Finding Life in Outer Space" travels across incredible tracts of space and time exploring the greatest mystery of the universe - why life exists. The show follows the scientists responsible for some of the biggest breakthroughs in understanding the origins of life and uncovers how cutting-edge observations and experiments are transforming the view of how the universe works.

Hydrothermal geyser pools in the Atacama Desert in Chile reveal secrets about the first steps life took on the primeval Earth, and high in the Arctic Circle, the northernmost science facility on the planet keeps an eye on the magnetic shield that protects humans from devastation by the solar wind.

The film explores U.S laboratories where the secrets of astrochemistry are recreated, including Öberg's lab at CfA, and looks to England where they are closing the gap between chemistry and biology by simulating conditions on Earth four billion years ago. Telling a story of creation on an incredible scale and with important consequence, "Finding Life in Outer Space" shows that science may be pointing to one fantastic conclusion -- we are not alone.

This program is one of the four premieres on the Smithsonian Channel centered around space exploration and humans' impact on the Solar System. The others include "Billionaire Space Club," "Earth from Outer Space," and "Leaving Earth: Or How to Colonize a Planet."

For more information on how to watch "Finding Life in Outer Space" and other Smithsonian Channel programs, visit: https://www.smithsonianchannel.com/ways-to-watch